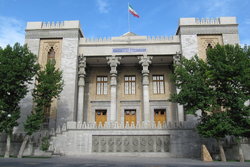 It seems that the United States police’s brutality against African-Americans knows no ‎boundaries, the Iranian Foreign Ministry said via Twitter on Wednesday.‎

RNA – It seems that the United States police’s brutality against African-Americans knows no ‎boundaries, the Iranian Foreign Ministry said via Twitter on Wednesday.‎

‎“It seems that US #PoliceBrutality against blacks knows no boundaries. And as always, the ‎response to calls for justice is employing even more force.”‎

It came after a video surfaced showing brutal treatment of an unarmed African-American ‎man under the knee of a US police officer before his death.‎

George Floyd died on Monday after being pinned down by a white officer despite yelling: “I ‎cannot breathe.”‎

Four Minneapolis police officers were fired on Tuesday, a day after a bystander’s cell phone ‎video captured one of them pressing his knee on Floyd’s neck.‎

The white Minneapolis police officer pinned him down with his knee in the US state of ‎Minnesota, which led to his death, police has confirmed.‎

‎“I stand before you and the city of Minneapolis here to say that our deepest condolences. ‎The vast majority of the men and women who proudly put on this uniform each and every ‎day understand the important role and relationship that we must have, we must have will all ‎of our community members,” said Minneapolis Police Chief Medaria Arrandondo.‎

An ambulance took the suspect to the hospital, where he died a short time later.‎

About 24 hours after Floyd’s death, hundreds packed the streets of Minneapolis, many ‎gathering at the intersection where Floyd was pinned to the ground by police officers shortly ‎before he died.‎

Tuesday evening, protesters begun at the intersection Floyd was last recorded alive and later ‎marched to one of the police precincts, CNN affiliate WCCO reported.‎

‎“We’re here to let them know this can’t be tolerated, there will be severe consequences if ‎they continue to kill us. This will not go on another day,” a protester told the affiliate.‎

Trump is 'toying with everybody,' says his counselor