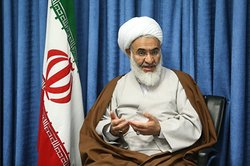 Hujjat al-Islam Abedini described the damages of the JCPOA as irreparable for the ‎country and stressed the need to prevent the infiltration of the enemies in the pillars of ‎the system.‎

RNA – In an exclusive interview with Rasa News Agency, Hujjat al-Islam Abdolkarim ‎Abedini, the representative of the Supreme Leader of the Islamic Revolution in Qazvin, ‎explained the damages caused by the Joint Comprehensive Plan of Action (JCPOA) and ‎said, “In the verses of Surah Al Imran, God states the ten dangers of the enemies and ‎disbelievers and says that the disbelievers and polytheists don’t like for good and ‎blessings to reach Muslims.”‎

The Friday prayer leader of Qazvin stated that the people experienced the points and ‎meaning of these verses during the bitter period of the JPCOA and said, “In these ‎verses, it’s stated that if the benefit reaches you, the Jews and the Christians will be ‎upset, and if it harms you, they will celebrate. Therefore, when Iran suffered internal ‎turmoil due to the JPCOA, the leaders of the Western countries were happy and ‎danced.”‎

Referring to the Supreme Leader’s guidelines concerning the United Nations Security ‎Council and warnings to the government regarding red lines, Hujjat al-Islam Abedini ‎said, “In recent years, the Supreme Leader has made detailed and meticulous remarks ‎about the leap of national production and economic prosperity, but Westoxified officials ‎have ignored their intentions and tied the country’s economic prosperity to ‎negotiations with the West and JCPOA.”‎

His Eminence said, “The JCPOA has infiltrated the country’s scientific and research ‎centres and institutions, and unfortunately the government has promoted a culture of ‎peace with the West, as well as enmity with allies, which will be a great cultural loss for ‎the country.”‎

He stated, “Imam Khomeyni has described the United States as the sworn enemy of the ‎Iranian regime and as a predatory wolf who will flee if you follow him, and if you run ‎away from him, he will chase you and tear you apart, but the government, unlike Imam ‎Khomeyni’s school, they have represented the culture of friendship with the enemies as ‎normal.”‎

Hujjat al-Islam Abedini stressed the need to strengthen the Islamic Resistance Front ‎and said, “The Iranian system will support the oppressed people and Muslims, Yemen, ‎Syria and Palestine in the proxy war to establish security in Islamic lands.”‎

He described the damage caused by the JCPOA to the countless and irreparable country ‎and added, “Some Westoxified leaders and political figures still have an optimistic view ‎of negotiations with the West and support the JCPOA agreement but the will of the ‎people is stronger than to harm the national interests of the country under these ‎pretexts.”‎