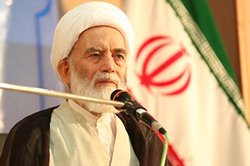 Ayatollah Taha-Mohammadi said, “Officials must not take a hypocritical stance such that the ‎enemies don’t feel that there is division, discord and a difference of taste within the country.”‎

RNA – In an interview with Rasa News Agency, Ayatollah Ghiasoddin Taha-Mohammadi, the ‎representative of the people of Hamadan in the Assembly of Experts‎ of the Leadership, referred to the ‎strategy of some government officials towards the Iranian parties’ disloyalty‏ ‏concerning the ‎Joint Comprehensive Plan of Action (JCPOA) and explained, “First, the Supreme Leader of ‎the Islamic Revolution [Ayatollah Khamenei] clarified the task of the country in crises, and ‎secondly, high-ranking politicians, inspired by the guidelines of the Supreme Leader, must ‎not take a hypocritical stance such that the enemies don’t feel that there is division, discord ‎and a difference of taste within the country.”‎

Referring to the filthy behaviour of Iran’s enemies regarding the JCPOA, he said, “The ‎enemies pounded the JCPOA to the ground and didn’t take any steps, and now, based on ‎their filthy nature, they say they are innocent. This is a sign of the peak of the hypocrisy of ‎enemies and their irreligiousness.”‎

Referring to an order from the Supreme Leader, Ayatollah Taha-Mohammadi clarified, “Within ‎the country, we must act in such a way that the enemies’ excuses against our country are ‎cut off and their hands don’t reach anywhere. The Supreme Leader said that Europeans are ‎like Americans and that there isn’t any difference between them.”‎

Ayatollah Taha-Mohammadi said, “Those who are negotiating with the United States inside ‎the country must be advised because they are seditionists and they are looking for an ‎excuse to create sedition and they don’t have a high level of commitment, religiosity and ‎understanding. Therefore, it’s necessary to behave in such a way that sedition doesn’t wake ‎up.”‎