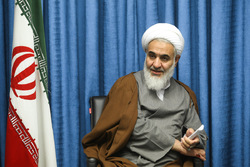 Supreme leader’s representative to Qazvin, saying that the enemy has used all its options against Iranian people, maintained, “All the plots of the enemy have been frustrated”.

RNA - The representative of the supreme leader to Qazvin province, Hujjat al-Islam AbdalKarim Abedini, talking to Rasa News Agency, maintained, “The US has taken different irrational and inhuman measures against Iranian people.”

He added, “After the Islamic Revolution, they have developed and executed different plots against this Islamic system, yet they have all been foiled.”

Qazvin Friday prayer leader, saying that such irrational behaviours have born them no fruit, stated, “A recent absurd measure taken by them is imposing sanctions against the supreme leader. However, the same as before, such actions will have no impact.”

Finally, Hujjat al-Islam Abedini said, “Launching a psychological war, enemies have attempted to show that they have created a tough situation for Iran, nonetheless, they know their new hostile actions and sanction yield no positive result, as their old sanctions and measures have been futile.”