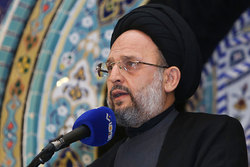 Beirut Friday prayer leader maintained, “The Lebanese nation defeated the Zionist Regime in 2006, and now this regime is still too weak to stand against this nation.”

RNA - Beirut Friday prayer leader, Hujjat al-Islam Sayyed Ali Fazlallah, delivering the sermons of Friday prayer, held in al-Imamain al-Hassanain (AS) in Haret Hreik region, congratulated the victory of Hezbollah over the Zionist Regime in 2006 and stated, “The enemy struck that war in order to demolish the Resistance Front, Lebanese people and army. However, Lebanon managed to repulse the enemy employing the Resistance Front, its people and the army”.

Stressing the Lebanese national unity, Hujjat al-Islam Fazlallah maintained, “Once again, today we stand against the Zionist Regime making recourse to all components of patience and resistance, and the hostile enemy should know that it can never conquer the Lebanese people conducting its continuous provocative activities.”

It is necessary to note that the Israeli army, striking a 33-day war, attacked Lebanon and Hezbollah in 2006, however, it lost the war and was repelled.