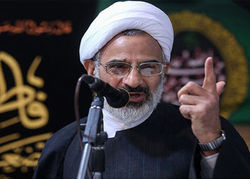 RNA - Hujjat al-Islam Abdullah Haji Sadeqi, the representative of the supreme leader to the Revolutionary Corps, speaking in the Congregation on the Unity between Shia and Sunni in the shadow of Imam Reza’s Benevolence, held in Golestan province, stated, “The oppression system continues to stand against the Islamic Revolution as there are some unresolvable differences between the two fronts, and as their target is not our land but the Heavenly religion.”

He continued, “Enemies are targeting our own religion and our revolutionary beliefs. We should form a front against them employing motivation, innovation and vigilance.”

Hujjat al-Islam Sadqi finally said, “The unity between Shia and Sunni is rooted in our beliefs. Both groups follow Quran and talk of Jihad Akbar and Jihad Asghar, and the former battle today is a cultural one that ought to be fought through putting up resistance.”