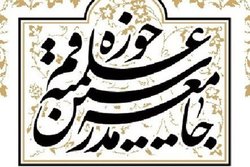 Society of Seminary Teachers of Qom, issuing a statement, stressed the defence of hijab and chastity as a religious value, called for the protection of the ones who enjoin the good.

Hijab, as a religious value, has a high position in the Islamic lifestyle, and a cultural weapon, it acts as an important shield against poisonous attacks, and thus, it is targeted by inhuman irreligious movement through launching destructive campaigns such the forced Hijab.

The Muslim woman wearing the proper Hijab acts a cultural combatant in the Muslim society, and this act strengthens the foundation of the family. The religious culture and values should be explicated and internalised by families, education system and media. Enjoining the good and forbidding the wrong, together with the marriage of the youth at the proper time and chastity should be promoted in the society.

Society of Seminary Teachers of Qom, appreciating all believing and revolutionary women who observe the Islamic codes of dressing, asks the governmental and cultural organisations, including the National Broadcasting, to defend the Heavenly limits of Hijab, they are expected to start discharging this obligation from their own institutes, moreover,  they are supposed to defend the ones who enjoin the good, and we ask them to stand against the cultural enemies and those who violate the related norms.