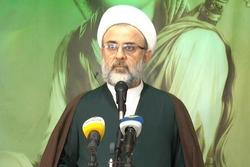 The member of the Lebanese Hezbollah’s central board stated, “The supreme leader has humiliated the US and UK through his courage and wisdom.”

RNA - The member of the Lebanese Hezbollah’s central board, Hujjat al-Islam Sheikh Nabil Qavooq, speaking in the southern al-Qalila area, responded to the execution of two Bahraini youths by House of Khalifa and said, “House of Khalifa Regime follows the policy of suppression and commitment of crimes as dictated by Israel and the US.”

He then said, “Iran has shown the world that it is the first symbol of Resistance against the arrogance of the US and has taught the lesson of resistance, power and standing against the oppression.”

He maintained, “Although heads of Arab states are submissive towards the US and UK, Iran has stood against and humiliated such powers through the courage and wisdom of the supreme leader.”

He finally pointed to the 2006 war between Israel and Lebanon and said, “This war showed that the US is the source of terrorism and it shares the hostility against Lebanon.”