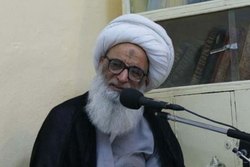 A source of emulation, based in Najaf, pointed out that serving in the holy shrines of the Infallibles is a Heavenly blessing that should be appreciated.

According to the correspondent of Rasa News Agency in the holy city of Najaf, a group of employees and officials of the holy shrine of Hazrat Abbas (AS) met Ayatollah Sheikh Bashir Najafi, a source of emulation, based in Najaf Ashraf.

“Working in holy shrines is a Heavenly blessing that should be appreciated, as it provides the man with dignity in the mundane world and the Hereafter”, Ayatollah Najafi added.

This source of emulation maintained, “Working in holy shrines is an onerous task, therefore, it should be accompanied with the recourse to the practical behaviours of the infallible Imams (AS).

Finally, he stressed, “Those who work in holy shrines should treat the pilgrims properly and kindly as many believers coming from different countries visit these places.”