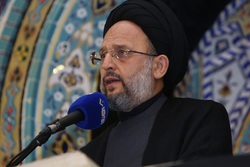 Dealing with different Hajj issues and worshipping and religious deeds, he stated, “Hajj should have positive effects on the life of Muslims and promote the spirit of peace and security among them.

Beirut Friday prayer leader maintained, “Muslims living in western countries should specifically attend to the development of a proper model of Islamic behaviour.”

Finally, Hujjat al-Islam Sayyed Ali Fazlollah added, “Islam is the religion of peace. Unity and solidarity among Muslims should be fostered. Solidarity and cooperation of Muslims with other groups also benefits humanity. Muslims living in the western countries are supposed to observe regulations and respect other people.”