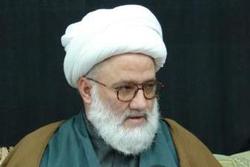 The source of emulation of the Iraqi Shiites, stressing the feeling of responsibility, stated that when the man is associated with a movement, sect or religion, his responsibility will become heavier.

According to the correspondent of Rasa News Agency in the holy city of Najaf, Ayatollah Sheikh Muhammad Yaqubi, a source of emulation, visited by some Muslim groups in his office, stressed man’s responsibility for his conducts and positions.

Ayatollah Yaqubi maintained, “When a man is associated with a movement, sect or religion, his responsibility will become heavier, as what he does and conducts will be a reflection of his beliefs. For instance, what Muslims do mirror the beliefs of all Muslims.”

He then said, “We believe in Islam, therefore, we together with what we do and say should be a true reflection of Islam. I ask the governmental officials, political and religious leaders, teachers, professors and the youth to act responsibly. As Islam has determined the best position for the Islamic Ummah.”