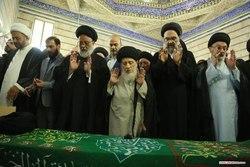 The funeral of a scholar of Najaf Seminary was held and then he was laid to rest in the holy shrine of Imam Ali (AS).

According to the correspondent of Rasa News Agency in the holy city of Najaf, the funeral of Ayatollah Sayyed Muhammadreza al-Khursan, a scholar of Najaf Seminary, was held in the presence of some sources of emulation, seminary teachers, the custodian of Imam Ali (AS) holy shrine and a group of governmental officials, seminary students and common people.

Ayatollah Sayyed Muhammad Saeed Hakim, a source of emulation, performed prayer on the deceased scholar, and then he was laid to rest in the chamber no. 30 of the holy shrine of Imam Ali, next to al-Khazra mosque and Ayatollah Khoee’s tomb.

Rasa News Agency extends condolences over the decease of Ayatollah and prays Heaven may show him mercy.

It should be noted that Ayatollah Sayyed Muhammadreza al-Khuran passed away on Tuesday, 07/23/2019, at the age of 90.