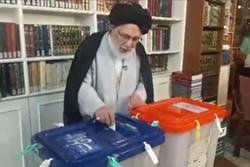 Ayatollah Sayyedan said, “The election of the representatives of the people must be such as to lead to the distinction and unity of the nation and to convey this unity to the world.”

RNA – After attending the eleventh session of the Islamic Consultative Assembly and the Interim Parliamentary Assembly of Experts in Khorasan Razavi province, Ayatollah Sayyed Jafar Sayyedan, a lecturer in the Islamic Seminary of Khorasan, said in a speech, “We hope that God Almighty will guide the valuable and resilient people of Iran on the path of the important goals of the Islamic Revolution, will protect the school of the Ahl al-Bayt and will grant its officials success in dealing with the nation and society.”

The renowned teacher in the Islamic Seminary said, “The election of the representatives of the people must be such as to lead to the distinction and unity of the nation and to convey this unity to the world because such an election has tremendous value and will humiliate the enemies and will make the allies happy and this movement will lead to unity and oneness.”

Ayatollah Sayyedan noted, “The system of the Islamic Republic of Iran is based on the Shi’ah school of thought and it’s unique in the world and the more this system is honoured, the more it will strengthen all Islam in different dimensions.”

His Eminence said, “God-willing, God will take such an election forward, which is the grace of everyone and we hope that different groups of people will participate in the elections for the sake of value of this vote.”

In conclusion, Ayatollah Seyedan said, “God Almighty has granted the Islamic country of Iran, which is based on the Shi’ah system, greater success because from the beginning, the objective of the Islamic Revolution and the system has been to maintain the school of thought of the Ahl al-Bayt and to observe the Islamic commandments.”