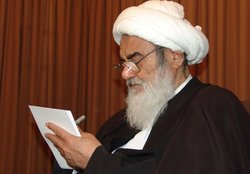 Casting his ballot, Ayatollah Mazaheri said, “People fervent participation in the elections will make the Islamic Republic of Iran proud, people hopeful and the enemy of the nation hopeless.”

RNA - Ayatollah Mazaheri, a member of the Third Assembly of Experts, cast his ballot in mobile ballot box number 725 in Esfahan.

Casting his ballot his eminence said in a short speech, “By the will of God, the fervent and mass participation of people in today’s election will make the Islamic Republic of Iran proud, people hopeful and the enemies of the nation hopeless.”