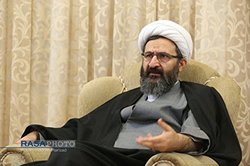 Hujjat al-Islam Mojtahed-Shabestari said that the passionate presence and selection of worthy representatives are two of our most important duties in the upcoming election.

RNA – In an exclusive interview with Rasa News Agency, Hujjat al-Islam Javad Mojtahed-Shabestari, the representative of the people of West Azerbaijan province in the Assembly of Experts, referred to the need for a high voter turnout in the February 21st legislative election and said, “A high voter turnout at the ballot box indicates the people’s interest in determining their own fate.”

His Eminence stated that the election is a matter of people’s attention to the outcome of the country and the future of the system and said, “The presence of the people at the ballot box guarantees the health of the election and frustrates the enemies from being able to reduce the people’s interest in the Islamic Revolution and the system.”

Hujjat al-Islam Mojtahed-Shabestari referred to the enemies’ project calling on Iranians to boycott the election and emphasized, “The presence of people at the ballot box and their concern about the election shows that the enemies’ empty promises and plots are doomed to failure and will have no effect.”

His Eminence said that despite the problems in the country, the people are always interested in the system and the Supreme Leader of the Islamic Revolution [Ayatollah Khamenei] and will never leave the battlefield and said, “Today we must know that the passionate presence and election of the worthy representatives are two important tasks in the election.”