Service : Sources of Emulation » Scholars
03 August 2020 - 15:03
News ID: 450561
A
Vice-President of the Assembly of Representatives of Students and Scholars of the Islamic ‎Seminaries of Qom:‎ 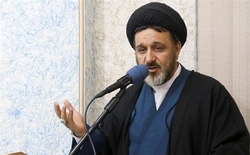 Hujjat al-Islam Razavi-Mehr stated that the members of religious delegations, by making the ‎right decisions, will confuse the thoughts of the Westoxified and said, “Husayni mourners are ‎at the forefront of the fight against Coronavirus.”‎

RNA – In an exclusive interview with Rasa News Agency, Hujjat al-Islam Sayyed Jalal Razavi-‎Mehr, the vice-president of the Assembly of Representatives of Students and Scholars of the ‎Islamic Seminaries of Qom, said that Muharram is the spiritual oxygen of the faith of the ‎Islamic community and added, “Facing the Coronavirus, the religious people have observed ‎the health protocols well and it’s fortunate that the followers of the clear religion of Islam are ‎the observers of the principles of their Muslim duty.”‎

Criticizing the reasons of those who oppose the holding of Muharram commemorations, His ‎Eminence continued, “Occasionally, words of xenophobia are heard from the owners of the ‎pen and titles, which have never been in line with our religious culture.”‎

He stated that we want the political movements to refrain from taking spiritual issues and ‎interfering in Muharram issues to their party, group and preference and said, “Interfering in ‎spiritual affairs for which the Supreme Leader of the Islamic Revolution [Ayatollah Khamenei] ‎and the supreme religious authorities are responsible is something beyond the dignity of ‎political and irresponsible people.”‎

Hujjat al-Islam Razavi-Mehr pointed out that the mourners of the Master of the Martyrs ‎‎[Imam al-Husayn] are at the forefront of the fight against the Coronavirus and said, “Today, ‎the same benefactors trained in the system of Imam al-Husayn help the sick in the hospitals ‎and distribute health materials and masks among the people by creating free salawati ‎stations.”‎

Emphasizing that the growth of the religion of Islam is due to the months of Muharram and ‎Safar, His Eminence added, “If we see that compassion, assistance, heterogeneity‎‏ ‏and love ‎for fellow human beings have resonated in the world today in Islamic Iran, it has been ‎achieved through these sermons of Muharram and Safar.”‎

He stated that we will hold Muharram mourning ceremonies this year, just as we did in ‎previous years, with strength and power, by observing the principles of hygiene and said, ‎‎“This isn’t an issue that the president or someone in charge has asked for but the issue of ‎Muharram isn’t the story of the movement, the person and individuals but rather, it’s the ‎story of religion and faith that all pure natures have accepted.”‎

Hujjat al-Islam Razavi-Mehr added, “It’s commendable that the believers dare to manage the ‎Coronavirus and we should try our best not to diminish Muharram and Safar because the ‎food of faith and spirituality of our country is obtained with the support of Muharram and ‎Safar.”‎

In conclusion, he stated that the people will never allow us to hold Muharram ceremonies ‎with a delay and said, “When the believers see crowded stadiums, cinemas, some shops, ‎subway lines and buses, they ask if Coronavirus is present only in husayniyahs and ‎mosques? Why doesn’t this smart political Coronavirus concern with subway lines, buses, ‎stadiums and some celebrations? Today we must think, speak and decide wisely so that the ‎believers won’t criticize us.”‎

Representative of Khorasan Razavi in the Assembly of Experts:‎

Representative of Khorasan Razavi in the Assembly of Experts:‎