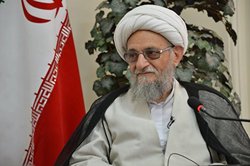 Ayatollah Alemi said, “In order to be truly saved from the harm of the enemies, we must act ‎with a revolutionary spirit, resist and stand firm against the enemies.”‎

RNA – In an exclusive interview with Rasa News Agency, Ayatollah Hasan Alemi, the ‎representative of the people of Khorasan Razavi province in the Assembly of Experts, ‎referred to the warnings of the Supreme Leader of the Islamic Revolution [Ayatollah ‎Khamenei] regarding the attempts by the enemies to make the people and the authorities ‎abandon the revolutionary path and said, “For forty years, the experiences of the Islamic ‎Revolution have shown that at different times and in various situations, whenever the ‎enemies wanted to seriously harm us, we stood against the evil of the enemies with a ‎resistant, revolutionary and jihadi spirit.”‎

Ayatollah Alemi stated that if we abandon, become weak or become doubtful in regard to ‎applying the Islamic Revolution, we will suffer serious harm and stated, “In order to be truly ‎saved from the harm of the enemies, we must act with a revolutionary spirit, resist and ‎stand firm against the enemies.”‎

He continued, “In the event that the enemies have finally brought the economic blockade to ‎the end and there is no room for further sanctions, certainly resistance is the solution. If our ‎revolutionary and resistant spirit declines and the enemies prevail over us, we will surely ‎suffer a more severe and fatal blow than ever before.”‎

Tags: Alemi Revolution Iran Sacred Defence
Short Link rasanews.ir/201sQ6
Share
0
Please type in your comments in English.
The comments that contain insults or libel to individuals, ethnicities, or contradictions with the laws of the country and religious teachings will not be disclosed