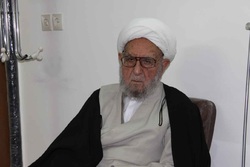 Ayatollah Ebrahim Amini passed away on the evening of Friday, April 26, 2020, the first night ‎of the holy month of Ramadan, at Shahid Beheshti Hospital in Qom.‎

RNA – Ayatollah Ebrahim Amini passed away on the evening of Friday, April 26, 2020, the ‎first night of the holy month of Ramadan, at Shahid Beheshti Hospital in Qom. ‎

Due to suffering from a long illness, he had been in and out of the hospital several times ‎over the past month and re-entered the hospital a few days ago.‎

His Eminence was born on June 30th, 1925 in Najafabad, Esfahan province. ‎

After finished his primary studies in Najafabad, he joined the Islamic Seminary of Esfahan in ‎‎1942. After completing his curriculum of religious studies in Esfahan, he joined the Islamic ‎Seminary of Qom in 1947, where he studied dars al-kharij, jurisprudence and principles, ‎under the tutorship of most eminent religious scholars of that period. ‎

While pursuing his religious studies at Esfahan and Qom he also taught Arabic literature, ‎jurisprudence and philosophy. Because of his special attitude and inclination towards the ‎sciences of psychology, child psychology, education and training, family-rights, family-ethics ‎and the narrations of Prophet Muhammad and the Infallible Imams, he pursued advanced ‎studies and research in these areas.‎

From the very beginning, he was interested in writing and academic research and therefore, ‎since 1945 he had been engaged intensively in writing and research.‎

He also wrote many miscellaneous articles written on various issues, including ideological, ‎political, social, ethical and educational topics for presentation at national and international ‎seminars and conferences. ‎

In addition to his teaching responsibilities he also held many important national positions as ‎follows:‎

Presence of the youth in 22 Bahman marches demonstrates the authority, continuation of the ‎ideals of the Islamic Revolution

0
0
Answer
قضى آية الله أميني حياته في خدمة الترويج للإسلام وتعزيز الأخلاق والروحانية.
Please type in your comments in English.
The comments that contain insults or libel to individuals, ethnicities, or contradictions with the laws of the country and religious teachings will not be disclosed