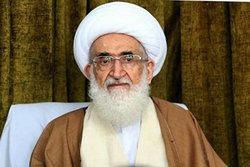 The revered source of emulation issued a message to the International Conference on the ‎International al-Quds Day and emphasized, “Soon al-Quds will be liberated by the Muslim ‎youth and the oppressive Zionist regime will disappear.”‎

RNA – Grand Ayatollah Hoseyn Nouri-Hamadani issued a statement to the International ‎Conference on International al-Quds Day in which he emphasized, “Soon al-Quds (Jerusalem) ‎will be liberated by the Muslim youth and the oppressive Zionist regime will disappear.”‎

The revered source of emulation emphasized, “Today, one of the most important issues in ‎the Islamic world and in the international arena is the issue of the holy city of al-Quds and ‎Palestine.”‎

He referred to verse 75 of Surah al-Nisa (The Women) and said, “One of the valuable points ‎that has been repeatedly emphasized in the Holy Quran is the struggle against the oppressor ‎and the protection of the oppressed. Unfortunately, human rights organizations and Islamic ‎organizations, and some Muslims, especially those who publish millions of copies of the Holy ‎Quran a year and send them around the world and falsely introduce themselves as servants ‎of the Quran and the Two Holy Shrines [Makkah and Madinah], haven’t paid heed to these ‎verses and have ignored them.”‎

Ayatollah Nouri-Hamadani described Palestine as the primary issue of the Islamic world and ‎added, “It’s with great regret that some of the leaders of the Islamic world are helping the ‎oppressors, trampling on the rights of the oppressed nations, especially the Palestinian ‎people. With their hidden and behind-the-scenes help or compromises, or with their deadly ‎silence, they are reinforcing the oppression of arrogance and Zionism. They are weakening ‎al-Quds and for many years now, the seemingly great powers have been trying to make the ‎issue of al-Quds to be forgotten.”‎

He noted, “During the last forty years, at the initiative of the Supreme Leader of the Islamic ‎Revolution of Iran, Imam Khomeyni, and with the help of religious, passionate and Muslim ‎people in different parts of the world and sometimes with the restrictions of some ‎governments, al-Quds Day was kept alive and has been an arrow in the heart of this ‎sedition. He turned the day of al-Quds into a great Islamic day and introduced Zionism as a ‎cancerous tumour.” ‎

Ayatollah Nouri-Hamadani said, “al-Quds Day must still be considered the most important ‎international day. This year, due to the Coronavirus, [the al-Quds Day events] must be ‎celebrated under the supervision of the officials and in observation of the health guidelines. ‎the officials must respect the health of the Palestinian people and express their support for ‎the Palestinian people and the holy city Quds in any way they can and express their disgust ‎with the arrogant powers and the Zionists and their agents.”‎