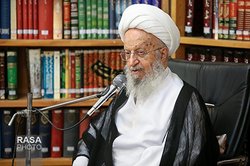 The revered source of emulation stated that placing trust in the United States and the West ‎isn’t acceptable and added, “Many of the economic problems and the high prices in Iran are ‎due to mismanagement and lack of supervision by the authorities.”‎

RNA – In a meeting with one of the officials of the seminary jihadi groups, Grand Ayatollah ‎Hoseyn Nouri-Hamadani expressed strong concerns about the living conditions of the people ‎in Iran and said, “We have repeatedly said that the authorities must not tie all the issues of ‎the country to sanctions, but the fact is that there is no supervision in the market and prices ‎rise without supervision. Sometimes when I go shopping, I see two nearby shops. They ‎offer the goods of a company at two different prices or they buy domestic products from ‎hard-working farmers at a very low price, but they reach the consumer at a high price. This ‎has nothing to do with sanctions anymore. There must be supervision and nobility and ‎proper management.”‎

The revered source of emulation stated, “Experience has shown that we can solve some of ‎the problems with the same young forces and with the same facilities. Of course, some ‎people seek to insinuate that the way to saving our country is to compromise with the ‎United States and the West, while they saw what the United States did unless some people ‎sought compromise and didn’t some people seek it and go after?”‎

His Eminence emphasized the importance of the position of Wilayat al-Faqih (Guardianship ‎of the Jurisprudent), saying, “In recent years, the Supreme Leader of the Islamic Revolution ‎‎[Ayatollah Khamenei] has usually expressed the slogan of the year in terms of economic ‎issues and has stated a roadmap for officials to implementation, including support for ‎Iranian goods, support for domestic production, a leap in production and the resistance ‎economy, but it remains to be seen whether the authorities have done their duty.”‎

Ayatollah Nouri-Hamadani further stated, “I advise the officials, including government and ‎parliamentary officials, to take care of the living conditions of the people as soon as ‎possible, to carry out serious monitoring of the market, and to help us overcome these ‎problems, God-willing.”‎