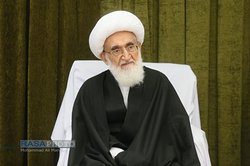 The revered source of emulation appreciated the conscious presence of the Iranian people at the ballot boxes and called on those elected by the people to take the first opportunity to solve the problems, especially the living and unemployment problems.

RNA – Grand Ayatollah Hoseyn Nouri-Hamadani praised the glorious presence of the Iranian people in the elections and the despair of the enemies.

Abdolreza Rahmani-Fazli, Iran’s interior minister, said over 24 million Iranians, out of a total of about 58 million eligible voters, took part in the parliamentary elections on February 21st, putting the overall voter turnout at 42.57 percent.

The message text of the source of emulation is as follows:

With the assistance from the Holy Essence of God and the special attention of our Master, the Remainder of God, the Imam of the Time, the noble, religious and wilayati people of Iran once again came out of another examination with pride and disappointed the enemies.

Our people have shown that they are committed to the system, despite all the problems, especially the living and economic problems, and that the propaganda circulated day and night by the enemies on satellite networks and on the internet has not had an effect.

As it was stated before the election, the enemies of the Iranian people have never been lined up in front of us like this, so everyone, especially the officials, must be vigilant.

Thanking the honourable people of Iran for their participation in the elections, I call on those elected by the people to make commitment, dedication, guardianship, recognition of the enemies, hostility toward the enemies and especially service to these loyal people the focal point of their work and not have any deficiency in their service and take the first opportunity to solve the problems, especially the living and unemployment problems.

I pray to God Almighty for the success of everyone,
Hoseyn Nouri-Hamadani