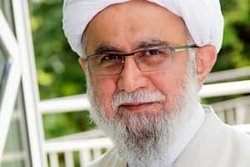 Last year the Ahl al-Bayt World Assembly had changes in its executive and managerial arms. These changes could lead to a revision of the structures and replacement of the General Assembly members so that the Assembly, at the beginning of the fourth decade of its blessed activity, could address new demands of Shiites and the lovers of AhlAl-Bayt (a.s) worldwide.

RNA - Last year the AhlulBayt (a.s.) World Assembly had changes in its executive and managerial arms. These changes could lead to a revision of the structures and replacement of the General Assembly members so that the Assembly, at the beginning of the fourth decade of its blessed activity, could address new demands of Shiites and the lovers of AhlAl-Bayt (a.s) worldwide.

On the occasion of Nowruz and start of 1399 SH, Iranian new year, Ayatollah Ramezani, Secretary General of the Ahl Al-Bayt World Assembly, issued a message to Shiites and Muslims worldwide.

Referring to the bitter events of 1398 SH, Ayatollah Ramezani also mentioned the great victories that achieved by the Muslims of the world.

Ayatollah Ramezani also mentioned the changes which took place in the Assembly last year, saying that by those changes in the structure and renovation in the general assembly, the organization seeks to properly address the new demands of the Shiites worldwide.

The full text of the message of the Secretary General of the Ahl Al-Bayt World Assemblyis as follows:


In the Name of Allah, the Beneficent, the Merciful

O’ Conqueror of hearts and sights
O’ Planner of night and day
O’ Transformer of power and conditions
Transform our condition to the best of conditions!

The year 1399, which is the new year in the solar calendar, coincides with the month of Rajab 1441 AH.

This year started with the name of Imam Musa ibn Ja'far al-Kadhim the 7th Shiite Imam (PBUH) whose martyrdom anniversary was on the first day of the year. This year is more blessed with Prophet Muhammad’s Bi'tha, one of the great eves of Islam, in the first days of it.

God willing these coincidences would guarantee blessing, love, and consideration of Prophet Muhammad and his Ahl Al-Bayt toward us and we hope for the sake of these sacred figures the closed doors would be opened for Islamic Ummah.

Apart from the natural disasters that are inevitable consequences of this mundane world, oppressed Muslims encountered many crises and troubles which were made by tyrants.

Crises in Iraq and Lebanon could be mentioned among those which provoked by foreign embassies to weaken the Axis of the Resistance.

The events which we have witnessed in Nigeria in recent years – illegal detention of Sheikh Ibrahim Zakzaky and his respected wife – continued in the past year (1398 SH); the events which led to martyrdom of some of Sheikh’s companions.

The other disaster which took place last year was the cowardly assassination of two great Iranian and Iraqi figures, martyr Major General Qassem Soleimani and Martyr Jamal Jafar Ibrahim (Abu Mahdi al-Muhandis) and their escorts. The terrorist act of Trump’s regime although was bitter but empowered Islamic values all over the world. Funeral procession of these two dear martyrs in eight cities of two countries and then Iraqi parliament vote in favor of expelling U.S. occupier troops and consequently mass demonstration by Iraqis in Baghdad to protect that vote, were great epics which showed the world the Iranian and Iraqi nations’ resistance.

The continuation of the oppression against Muslims and Shiites in different countries such as assassinations in Afghanistan and Pakistan, dire situation of Bahraini inmates, mass executions in Saudi Arabia, aggression and constant killing of innocent people in Yemen, Israel’s violence and occupation in Palestine and illegal detention of Mr. Sayyed Ahmad Sambi in Comoros; all in all continue to defame the face of the world and those who claim to defend human rights.

What happened in the middle of last year in Kashmir and at the end of the year in India – especially in New Delhi – also made Muslims heavy-hearted worldwide.

The last disaster which Muslims and all people of the world faced in the last year (1298 SH) has been the outbreak of new coronavirus (Covid-19) which has engaged thousands around the world.

Meanwhile, the continuation of the illegal and oppressive sanctions against Iranian hero nation by the criminal United States, were among dire problems of the last year. The cowardness of the Great Satan has even continued in recent emergency health care situation and extensive sanctions on medicine and medical care have more than ever shown the atrocities of the arrogance and colonialism for the world.

But Muslims achieved significant victories despite these bitter events:

People epic and fervent presence in Ashura and Arbaeen rituals which human dimension of them is revealing year by year; breaking down the arrogance of the US by targeting its surveillance aircraft and Ain al-Assad airbase in Iraq; firmly rejecting so-called Zionist “the Deal of the Century” by most of the Muslims worldwide; significant victories of Yemeni popular resistance against full-armed aggressor coalition; vigilance of the Islamic Resistance groups in Iraq and Lebanon against conspiracies; more areas in Syria cleaned from terrorists; determination of the international resistance front with the mass funeral procession of martyr General Qasim Soleimani; and scientific and technologic achievements of Muslim scientists were among the sweet events happened last year.

Iranian Parliament election and people’s mass participation were other bright points of the last year. Participating in the election, wise and insightful Iranian people determined their political path so despite all pressures and shortages make the society hopeful. Meanwhile, hostile media outlets and channels, using their enormous budget, tried to show the Islamic System inefficient and by making people disappointed they wanted to prevent people to vote.

The picturesque scenes of self-sacrifice and the dedication of health advocates – from doctors, nurses, and all the medical staff to the Jihadi and volunteer forces – at the forefront of the fight against the coronavirus also created another bright season for our society.

In the year which passed, all these bitter and sweet events were divine testing and examinations, which according to the divine tradition, will be continued and the followers of the Ahl Al-Bayt (a.s) should pass those examinations successfully to prepare the world for the emergence of Imam Mahdi and establishing justice.

Last year the Ahl Al-Bayt World Assembly has had changes in its executive and managerial arms. These changes could lead to a revision of the structures and replacement of the General Assembly members so that the Assembly, at the beginning of the fourth decade of its blessed activity, could address new demands of Shiites and the lovers of Ahl Al-Bayt (a.s) worldwide.

Here, once again, I should appreciate the Supreme Leader of the Islamic Revolution for his eminence trust to me and entrusting the great responsibility of serving followers of Ahl Al-Bayt (a.s). I assure his eminence that with jihadi (volunteer) and sincere work, all parts of the organization are on the path of evolution, and as the Supreme Leader mentioned in the order of appointment, the Assembly will continue to move forward in spreading the teachings of pure Islam and try to unify of the Islamic Ummah.

I also should sincerely appreciate all honorable members of the Higher Council, General Assembly, regional assemblies, cultural centers affiliated with the Ahl al-Bayt World Assembly in different parts of the world as well as my colleagues in headquarters who despite all the limitations and difficulties, dedicated to promoting the Assembly's activities to develop the intellectual, cultural and social progress of the followers of Ahl al-Bayt.

In the end, congratulating blessed time of spring, I wish 1399 be the year of sympathy, kindness, blooming of the kind emotions and (peaceful) coexistence and by the grace of God and with the wise leadership of the Supreme Leader, Ayatollah Khamenei, we would witness the “surgein production” and disgrace of sworn enemies of Islam and Iran and then a new century of the glory and esteem of Islam would emerge after current hardships as (God the exalted says in Quran says) “For indeed, with hardship [will be] ease” (94:5) and “Unquestionably, the help of Allah is near” (2:214).

And “Praise be to Allah, the Cherisher and Sustainer of the worlds”

Spokesman of the Islamic Seminaries of Iran:

With their media tools, the enemies seek to make people regret their ideals