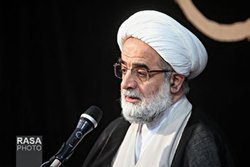 Ayatollah Tahriri said that Rajab is a month of blessings and mercy from God Almighty and added, “God’s grace can be observed in the month of Rajab.”

RNA – In a voice message issued to the quarantine due to the spread of COVID-19 (Coronavirus), Ayatollah Mohammad-Baqer Tahriri, the custodian of Tehran’s Marvi Seminary, explained the virtues of the holy month of Rajab and said, “God is absolutely affectionate and merciful.”

The renowned teacher of ethics added, “In the month of Rajab, God Almighty specifically assigns an angel in the seventh heaven to summon the servants and invite them toward the Prophet Muhammad.”

He pointed out that God has special favour and mercy on all human beings in this month, saying, “In the supplication of the month of Rajab, which is recited after the daily prayers, three types of gifts to God Almighty are explained.”

He continued, “Even if someone is an atheist, a hypocrite and a disbeliever and doesn’t exercise this particular consciousness of God, the Lord doesn’t abandon his favour and always imparts it to him.”

In conclusion, Ayatollah Tahriri said, “God is compassionate and merciful and on the basis of the kindness and mercy that He has, creatures aren’t deprived of the grace of this month.”