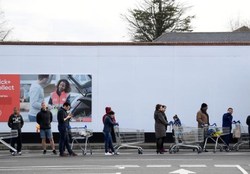 The British government urged its citizens on Saturday to stop panic buying and stockpiling as shelves continue to be empty across the country amid the coronavirus outbreak.

RNA - Secretary of State for Environment, Food, and Rural Affairs George Eustice asked people to be responsible when they shop and think of others during a daily news conference, Anadolu news agency reported.

His comments came as the latest National Health Service figures revealed that the death toll from coronavirus across the UK reached 233.

He said people should think in particular of key workers, such as National Healthcare Service staff, who could not find supplies after finishing their shifts. He also thanked workers in the supermarket and wider food industry for their “crucial service”.

“We need people to calm down and only buy what they need and think of others when they are purchasing,” Eustice said.

“Buying more than you need means others may be left without,” he said, adding, “We all have a role to play in ensuring we all come through this together.”

Dickinson said, “There is plenty of food in the supply chain. There is a billion pounds more food in people’s houses than there was three weeks ago, so we should make sure we eat some of it.”

The virus emerged in Wuhan, China last December, and has spread to at least 167 countries and regions, according to data compiled by the US-based Johns Hopkins University.

Despite the rising number of cases, most of the people who contract the virus suffer only mild symptoms and recover.

Spokesman of the Islamic Seminaries of Iran: