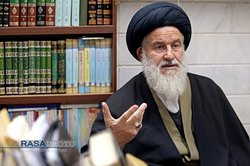 Ayatollah Tavakkol said that tribulations and problems are due to our own actions and said, “We reap what we sow but in the month of Sha’ban we can remove the calamities from ourselves and society.”

RNA – In an exclusive interview with Rasa News Agency, Ayatollah Sayed Rahim Tavakkol, the representative of the people of Mazandaran province in the Assembly of Experts, referred to the effect of supplications and prayers on alleviating tribulations and problems and said, “God created his servants for worship and these tribulations and calamities are all tests for us.”

The teacher of Islamic ethics in the Islamic Seminaries emphasized that most of these tribulations go back to us and added, “God says in verse 30 of Surah al-Shura [The Counsel] ‘Whatever affliction that may visit you is because of what your hands have earned and He excuses many [an offense of yours].’

He explained, “This issue is also emphasized in our narrations to the extent that Imam Ali al-Ridha said, ‘Whenever servants commit such sins that they had not committed before, God creates a new misfortune against them of which they had no knowledge.’”

Ayatollah Tavakkol said, “How many people do you really know who are to blame in this situation? How many people believe that because we weren’t merciful and because we sinned that these calamities have been descended upon us? Therefore, we need to know that whatever we have planted, we will reap.”

In another part of the interview, His Eminence referred to the verse of the Quran, “We have certainly sent [apostles] to nations before you, then We seized them with stress and distress so that they might entreat [Us]” [6:42] and said, “We said that tribulations and calamities are mostly caused by our own actions but according to this verse we can heal them again by praying and supplicating to God.”

He described the month of Sha’ban the best time to return to the house of God and said, “‘basa’ means ‘poverty’ and ‘misery’ and ‘dharra’ means ‘illness’ and ‘adversity’ but all of this returns to our supplication, repentance and forgiveness and now, we are in the best time for supplication and prayer.”

Ayatollah Tavakkol said, “In this time we are at home, we can contemplate a little in our isolation and we can see if we were real servants or now and in this month, which is the beginning of the month of the divine feast, we must resort to God and the Ahl al-Bayt and this this manner, God Almighty will surely remove the calamities in this case.”