With their media tools, the enemies seek to make people regret their ideals 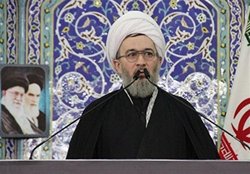 Hujjat al-Islam Ehtesham-Kashani said, “The vultures of the arrogant media have attacked the Iranian people over the principle of this devious virus and have created fear and regret among the people over their values and ideals.”

RNA – In an exclusive interview with Rasa News Agency, Hujjat al-Islam Ali Ehtesham-Kashani, a senior lecturer in the Islamic Seminary of the Qom, referred to the perpetual enmity of the arrogant powers of the world towards Iran’s Islamic system of government and the Islamic Revolution and said, “What the enemies do is to take every opportunity to exert their enmity and to strike the Islamic Revolution and the system because they have been challenging the accepted norms of the world of disbelief, idolatry and arrogance for more than forty years and we expect nothing more than hostility from the enemies.”

The temporary Friday prayer leader of Kashan referred to the attacks by the arrogant media against the Iranian people in light of the spread of COVID-19 (Coronavirus) in the country and said, “The vultures of the arrogant media have attacked the Iranian people over the principle of this devious virus and have created fear and regret among the people over their values and ideals.”

He pointed to the enemies’ efforts to destroy the reputation of Qom and to spread fear of Qom and added, “Rather than being praised as the first province to recognize this devious virus, Qom has been cited by the arrogant powers and media agents online as a disadvantage and a blow.”

His Eminence emphasized that the people can overcome the crisis posted by the Coronavirus by standing up against the enemies’ propaganda related to the Islamic Revolution and said, “In this situation, we can manage to overcome this crisis by resisting the enemies and not listening to their spreading of discord.”

Referring to the recent concerns of the Supreme Leader and his efforts to establish a health centre and clinic and mobilize all the facilities of the system to confront the Coronavirus, he said, “Representatives of the World Health Organization (WHO) praised the ability and power of the Islamic system’s management in dealing with this devious virus and the angels and the defenders of the sanctities of health once again proved to the world that they were able to defend the front line in the fight against this virus.”

Hujjat al-Islam Ehtesham-Kashani explained a recommendation to the public in regard to the outbreak of the Coronavirus and said, “The best act that can weaken this virus and not harm us is to stay at home and attend few public gatherings so that God-willing, with the blessings of the month of Sha’ban and the birth anniversary of Imam al-Mahdi, the officials and commanders of the health fronts can announce the victory over this devious virus as a celebration of the birth of the Imam al-Mahdi to the people of Iran and the world.”