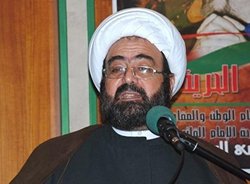 RNA – In his Friday prayer sermon delivered to a large and fervent crowd of believers in the ‎Lebanese capital Beirut, Hujjat al-Islam Hasan Sharifah, the Secretary of Endowments in the ‎Supreme Islamic Shi’ah Council of Lebanon, said, “The action taken by the United States to ‎martyr Major General Qasem Soleymani and his Iraqi companions is condemned.” ‎

The Lebanese Shi’ah scholar remembered the martyrs, Major General Soleymani and Abu ‎Mahdi al-Muhandis, as those who inflicted painful blows on the Daesh terrorist group and ‎destroyed its roots.‎
‎ ‎
Hujjat al-Islam Sharifah described this American crime as an act of aggression that would ‎exacerbate tensions in the region and will afflict it with a bad fate.‎