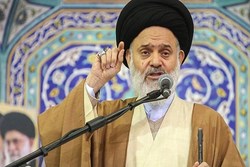 The secretary of the Seminary's Supreme Council, saying that the mission of the seminary is heavier now, stated, "With regard to the attacks of enemies, clerics are supposed to attend in the field more seriously and do illuminations."

RNA - The secretary of the Seminary's Supreme Council, Ayatollah Sayyed Hashim Husseini Bushehri, on the sideline of the ceremony held for opening the new education year of the seminaries, extending condolences to seminary students, scholars and teachers on the anniversary of martyrdom of Imam Hussein (AS), said, "The Revolution has placed a heavier responsibility on the seminary, religious scholars and seminary students."

"Being revolutionary started prior to the victory of the Islamic Revolution in seminaries and by students, and we are revolutionary thanks to their attempts. Therefore, the group that played a role in this regard is expected to play a part in the next stages", Ayatollah Husseini Bushehri said.

He finally expressed, "With regard to the confrontation of the Arrogant powers with the Islamic Revolution, clerics should attend in the filed more seriously, they ought to do illuminations and elaborate the issues of the revolution for people, as both our people and others are waiting to hear the message of the Revolution."