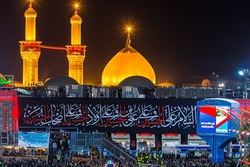 The chairman of Ayatollah Najafi’ office said, “Imam Hussain (AS) presented the whole of his life for the religion and stressed the acquisition of religious knowledge.”

According to the correspondent of Rasa News Agency in Najaf Ashraf, the son and chairman of office of Ayatollah Najafi, a source of emulation, on the sideline of his visit of the shrine of Imam Hassan’s daughter, al-Alawia ash-Sharifa, said, “In the month of Muharram, the confrontation of the good and the evil happened, the former led by Imam Hussain (AS) and the latter headed by Ibn Saad [installed by Yazid]. The said confrontation still exists in the present world.”

He added, “Imam Hussain (AS) presented the whole of his life for the religion and called for the preservation and acquisition of the religious knowledge.”

The chairman of Ayatollah Najafi explained, “The true and original source of the religious knowledge are Ahl al-Bay (AS). They link the earth to heaven and distribute the right and invite to justice.