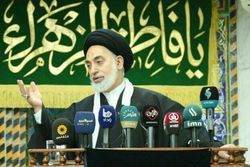 The Friday prayer leader of Najaf called the American al-Hurra TV channel a supporter of the ISIS and stated that many Shiites are being harassed and tormented even in countries with Islamic governments.

According to the correspondent of Rasa News Agency in Najaf Ashraf, the Friday prayer leader of Najaf, Sayyed Sadr ad-Din Qabbanchi, delivering the sermons of this week Friday prayer held in Fatima Kubra Hussainia, condemned the torment of the Shiites in some Arab and Muslim countries for holding/attending in mourning ceremonies of Imam Hussain (AS) and said, “Such governments don’t understand language and ration as killing innocent people is what they usually do.”

Responding to the recent act of the American al-Hurra TV channel against the Shiite sites and sources of emulation, Hujjat al-Islam Qabbanchi said, “This act of al-Hurra TV channel has deepened the wisdom and increased the readiness of people for battling in the soft warfare field. Iraqi people well know that al-Hurra TV channel is not interested in the good of Iraqi people. This channel called the ISIS terrorist and takfiri group the Islamic government upon its rise.”