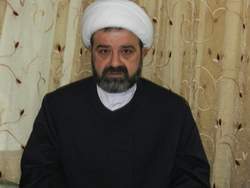 The Mufti of the Lebanese Soor (Tyre) announced that any relationship or cooperation with the Zionist Regime is forbidden.

RNA - The cultural head of the Amal Movement and the Mufti of Lebanese Soor (Tyre), Hujjat al-Islam Sheikh Hassan Abdullah reiterated that Imam Moosa Sadr had called for having recourse to Imam Hussein (AS) in the face of dangers created by enemies such Israel.

He stated, “With regard to the crimes committed by the Zionist Regime against humanity, any cooperation with this regime is forbidden, and any cooperation with it is equal to the commitment of treason against the Heavenly religions and missions and similar to participation in killing Imam Hussein (AS).”

Pointing to the release of some mercenaries of the Zionist Regime, the cultural head of Amal Movement pointed out, “Mercenaries should pay the cost of their crimes. Even the speaker of the Lebanese parliament has called for their punishment.”