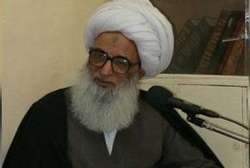 A source of emulation in Najaf Ashraf maintained, “A big problem of the present world is heresy that is rooted in ignorance.”

According to the correspondent of Rasa News Agency in Najaf Ashraf, Jochen Muller, a German official in Iraq, visited Ayatollah Sheikh Bashir Najafi.

During the meeting, Ayatollah Najafi pointed to the part of Germany in the development of Iraq and expressed satisfaction over the projects planned and carried out for the development and people of Iraq, and then added, “A big problem of the human society in the present time is heresy.”

Pointing to ignorance as the cause of heresy, he maintained, “Man’s dependences on the world and his frail commitment to religious and moral issues are other causes of heresy.”

Finally, Jochen Muller presented a report on the activities of his country for the improvement of the electricity and gas services in Iraq and stated that Iraq loses more than two billion Dollar each year in the area of gas fuel.