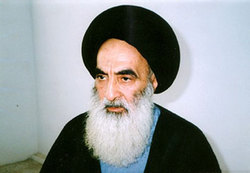 Iraq’s most prominent Shia cleric Grand Ayatollah Ali al-Sistani has called on the Baghdad government to launch a thorough investigation into the wave of violence during recent protests against corruption, staggering youth unemployment and poor public services, which started in the capital and then spread to other cities.

RNA - In a statement read out by his representative Abdul Mahdi al-Karbalai during a sermon in the holy city of Kerbala on Friday, Ayatollah Sistani gave authorities “two weeks” to release the findings of the investigation into the more than a hundred deaths recorded during the protests since October 1.

He also “demanded that the government investigate to find out which elements gave orders to shoot protesters, whatever their affiliation.”

“The government must change its approach in dealing with the country's problems,” the revered cleric said, adding that lawmakers also bore a heavy responsibility.

Ayatollah Sistani went on to call on authorities to act to “put an end to threats, beatings, abductions, sniper fire and violence by those who believe they can act with total impunity.”

On Wednesday, Iraqi Prime Minister Adel Abdul-Mahdi pledged to reshuffle his cabinet, launch a probe into the killing of protesters, and punish those who shot the demonstrators.

“We will ask the parliament to vote tomorrow on changes to ministries,” the Iraqi prime minister said in a televised speech.

He vowed that his government will refer the names of hundreds of corrupt officials to the judiciary for investigation.

Abdul-Mahdi also declared three days of national mourning over the deaths of at least 110 people and injuries of more than 6,000 others during the recent violent clashes between security forces and demonstrators in Baghdad and the country's south.

The remarks came only a day after the Iraqi cabinet approved the second package of reforms, including distribution of residential plots of land to citizens, expansion of municipal borders of cities, and changing agricultural land into residential.

The planned reforms also contain freezing the law, which allows payment of several salaries to one public servant, providing jobs for young people and activation of the agricultural lending fund.

Additionally, the Iraqi cabinet endorsed a possible study to minimize the age of retirement to give more jobs to the youth.