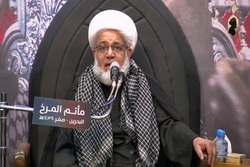 A Bahraini cleric was arrested for participation in the mourning ceremony held on the Ashoura of this year.

RNA - Bahraini security forces arrested Sheikh Saeed Asfour, a Shiite Bahraini cleric,  for attending in the mourning ceremony held on the Ashoura day of this year.

Al-Wefaq National Islamic Society of Bahrain, through a tweet, announced that Bahraini security forces have arrested Sheikh Saeed al-Asfour, a Bahraini cleric, and the chairman of Husseini Heyat of Hamad town, Sayyed Javad Asaad, for participation in the mourning ceremony held on the Ashoura of this year.

Al-Wefaq Society has also mentioned that six Shiite Bahraini residents have been arrested for their participation in some similar Shiite religious ceremonies.

Bahraini officials have announced that Sayyed Javad Asaad won’t be discharged for seven days until the legal procedures are taken.