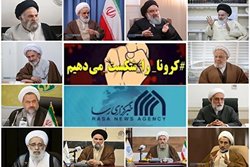 RNA – For nearly a month, Iran has been engaged with an unwanted guest called COVID-19 (Coronavirus), and this guest, as a sinister virus, comprises a large portion of the daily news and content viewed by society.

These days, we have heard, seen and read that the Coronavirus is less dangerous than all similar viruses and the only thing that is different is the speed of the transmission and spread.

The virus, which, of course, isn’t capable of overwhelming most people physically and only kills two to three percent of people, but has been able to disrupt the psychological climate of society and fear of this virus has become a concern for the people.

The current situation for our people, though difficult and painful, will certainly have many benefits in the era after the relative control of the Coronavirus with the help of God.

The religion of Islam is based on and personal and social health and hygiene and according to the Quranic verses and narrations, we find that there is a profound connection between religion and cleanliness and relief from tribulations such that many people today have forgotten supplicating and praying in order to ward off tribulation and illness..

Therefore, Rasa News Agency, held brief conversations with several members of the Supreme Council of the Islamic Seminaries, eminent teachers of dars al-kharij (post-graduate students), members of the Society of Seminary Teachers of Qom and administrators of the Islamic Seminaries and received healthcare and spiritual advice and information on the relationship between religion and health.

Ayatollah Sayyed Ahmad Khatami, a member of the Supreme Council of the Islamic Seminaries and a member of Assembly of Experts said, “In regard to such issues, everyone must act in regard to their own duty. All praise be to God, the health officials of the country have come to the fore and we thank them but the officials of spirituality, of which the Islamic Seminaries are at the forefront, are expected to be active in this arena and strengthen the beliefs of the people.

As much as the nation’s health officials strive to improve the health of the people, the clerics must raise the spirituality of the people at the headquarters and it’s recommended to recite supplication number seven of “Sahifah al-Sajjadiyyah” [Scripture of Sajjad] entitled “His Supplication in Worrisome Tasks.”

Ayatollah Seyyed Hashem Hoseyni-Bushehri, the head of the Supreme Council of the Islamic Seminaries, said, “To solve this problem, the first point is the issue of the observance and medical attention, including disinfection and avoiding unnecessary travelling and attending gatherings. The second is that besides all these issues and attention, we are standing alongside the precious treasures of supplication and resorting to the Ahl al-Bayt and acted according to the recommendations of the Supreme Leader of the Islamic Revolution. From the tongues of the Infallibles, the Prayer of Ja’far al-Tayyar is very much emphasized and recommended and is a very experienced prayer for the acceptance of prayer.”

Ayatollah Sayyed Mohammad Gharavi, a member of the Supreme Council of the Islamic Seminaries and a member of the Society of Seminary Teachers of Qom, said, “The Coronavirus is one of the infections that more than a hundred countries around the world have to deal with and we have to take its treatment seriously and the best way is to stop all unnecessary travel and stay at home as much as possible. On the other hand, human morale plays a very important role in the resistance of the human body. For this reason, in the month of Rajab, wherein divine mercy is shed, it’s necessary to pay attention to supplications, resorting and the imams.

Ayatollah Abbas Ka’bi, a member of the Assembly of Experts and a member of the Society of Seminary Teachers of Qom, said, “Supplicating and observing the health advice is a two-sided battle against Coronavirus. First, we are called upon to exert ourselves in hardships and difficulties and we must pay particular attention to the resorting and specific supplications, especially the seventh, twenty-third and fifty-fourth supplications of Sahifah al-Sajjadiyyah, especially reciting ‘Oh God! Keep me in your saved protection in which you keep whom you want!’ is highly recommended three times near noon and three times near dusk and of course, we must have hope in God and not rely on unconventional rumours, news and social media.”