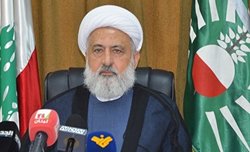 Hujjat al-Islam al-Khatib called for the severance of relations and the confrontation with any ‎attempt to normalize relations with the Zionist regime.‎

RNA – Hujjat al-Islam Ali al-Khatib, the deputy ‎speaker of the Lebanese Shi’ah Islamic ‎Assembly, said, “The judiciary must intensify its investigation because what happened in this ‎country has killed hundreds and injured thousands, as well as causing a lot of damage. It’s ‎necessary to reveal the names of the perpetrators and those responsible for this explosion ‎and to rebuild and heal the injured.”‎

His Eminence acknowledged, “We consider the victims of this incident as martyrs and once ‎again offer our condolences to the families of the victims and wish the injured a speedy ‎recovery. We call on the Lebanese people to stand together in the face of the consequences ‎of this tragedy and to extend a helping hand to the brothers. We also regret the abuse of ‎some politicians who use the blood of the martyrs to incite the people against the Islamic ‎Resistance [Hezbollah]. Instead of cooperating in this situation, these people are trying to ‎distort the reality and incite sedition in favour of the Zionist regime through social networks ‎and creating sedition.”‎

He stated, “We appreciate the resilient people of Lebanon on the anniversary of the victory ‎of the July War [2006 33-Day War], which proved that there is unity between the people and ‎the army and the Islamic Resistance, and we should know that the enemies are lurking and ‎only unity can protect it from the enmity of this regime.”‎

Referring to the plan to normalize relations with the Zionist regime, Hujjat al-Islam al-Khatib ‎stated, “We condemn the normalization of relations with this regime and call for the ‎severance of ties and efforts to portray them as a friend and declare that this regime is ‎racist, colonialist, seditionist and conspiratorial in the world.”‎

The Lebanese Shi’ah scholar added, “It’s necessary to form a government of national ‎salvation as soon as possible and to consolidate national unity, implement reforms, ‎economic progress, preserve the value of the currency, political and social stability and ‎restore the people’s trust in the fight against corruption. It’s also necessary to punish the ‎perpetrators of the explosion and to help rebuild and repair the damage.”‎

He added, “We appreciate and thank the friendly and brotherly countries for helping the ‎Lebanese people and healing their wounds and we hope that other countries will take steps ‎in this direction to help Lebanon.”‎

He said, “In the face of escalating the Coronavirus as a result of recklessness and indifference to ‎preventive measures to limit the spread of the epidemic, it’s necessary for people to refrain ‎from gathering. We call on the people to follow the instructions of the Ministry of Health and ‎the relevant authorities to limit the spread of the virus in the country so that the country ‎doesn’t suffer from new crises and epidemics.”‎