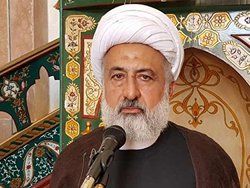 Hujjat al-Islam Ali al-Khatib noted that Iran, despite the cruel sanctions imposed on it, ‎is capable of resisting and defeating its enemies. ‎

RNA – In his Friday prayer sermon to a large and fervent crowd of believers in Libbaya ‎Mosque in the town of Libbaya in Lebanon’s Western Beqaa district, Hujjat al-Islam Ali ‎al-Khatib, the vice-president of the Shi’ah Islamic Supreme Council of Lebanon, ‎described the economic situation of the Lebanese people as “abject” and said, “Many ‎people are struggling with economic and livelihood problems and this issue has made ‎the responsibility of the politicians heavier. Therefore, officials must not continue their ‎predecessors’ path of wasting money and indebting the country.”‎

Hujjat al-Islam al-Khatib responded to the statements by American officials about ‎launching a potential attack on the Islamic Republic of Iran and said, “Iran has proven ‎that despite the very strong sanctions imposed on it that it’s strong and steadfast in ‎the pursuit of its goals. On this basis, the victory will belong to the Islamic Republic of ‎Iran and its allies.”‎

He called on Saudi Arabia to engage in dialogue with the Islamic Republic of Iran and ‎against the Zionist occupation regime that seeks to harm all peoples of the Islamic and ‎Arab countries and said, “We want the two sides to come to the negotiating table and ‎engage in dialogue to solve the problems and defeat the enemies of the region, who ‎are pursuing a plot in the form of new alliance which includes the participation of ‎Israel.”‎

In another part of his Friday prayer sermon, Hujjat al-Islam al-Khatib emphasized the ‎need for the Lebanese government to work with the Syrian government to resolve the ‎problems of the Syrian refugees, saying that the refugees should return to their homes ‎as soon as possible, otherwise there would be various problems in Lebanon. ‎

Tags: Khatib Lebanon Libbaya
Short Link rasanews.ir/201sKl
Share
0
Please type in your comments in English.
The comments that contain insults or libel to individuals, ethnicities, or contradictions with the laws of the country and religious teachings will not be disclosed