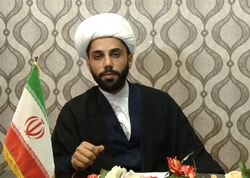 Rasa – Hujjat al-Islam Aref Ebrahimi, a researcher and scholar in the Islamic Seminary of ‎Qom, said. “In order to continue its arrogant policies, the United States has sharpened its ‎claws and teeth over Venezuela.”‎

RNA – Venezuelan opposition leader, Juan Guaidó, who until recently was chairing the ‎National Assembly of Venezuela, introduced himself as the president of the South American ‎country alongside his supporters and was sworn in. ‎

This move by Guaidó has many domestic and international supporters and opponents, such ‎that Donald Trump, who was pleased with the chaos in Venezuela, quickly recognized the ‎Venezuelan opposition leader as the country’s official president and, as a result, his allies, ‎including Colombia, Brazil, Argentina, Canada, Paraguay, Peru, Ecuador and Panama, backed ‎Guaidó and countries such as China, Russia and Iran opposed him.‎

The developments in Venezuela are debated and discussed by Hujjat al-Islam Aref Ebrahimi, ‎a researcher and scholar in the Islamic Seminary of Qom, in the following article for Rasa ‎News Agency. ‎

‎1. The actions of the United States and its allies in support of the opposition leader of ‎Venezuela are considered to be an intervention in the internal affairs of the country and in ‎fact it can be considered as resistance by a popular government against the greed of the ‎imperialists.‎

‎2. During the presidency of Hugo Chávez, the United States opposed Venezuela for its ‎stance against imperialism and hegemony and this opposition rose during the presidency of ‎Nicolás Maduro such that that White House officials could not keep silent about this and ‎thus, they pursued a coup d’état in this country.‎

‎3. Venezuela has a strategic and geopolitical position in South America, and also in Latin ‎America, and with the arrival of Hugo Chávez, Venezuela has played a very significant role in ‎the politics and economy of the continent. The United States was furious with Chávez’s ‎actions because it could not advance its policies in Latin America and thus, he took every ‎step possible to harm Chávez, eventually killing him through poison.‎

‎4. The United States didn’t allow Maduro to continue Chávez’s policies and with the direct and ‎indirect support of his opponents, they sought to launch a coup d’état and internal ‎dissension against him.‎

‎5. The White House officials also made a lot of effort to reduce Venezuela’s international and ‎political power at the level of Latin America such that that several powerful states that ‎backed Venezuela until yesterday became the enemies of this country due to the planning ‎and intervention of the United States and pro-American leaders and opponents of Chávez’s ‎ideas were brought to power in Argentina, Brazil and Ecuador.‎

‎6. The United States imposed strict sanctions on Venezuela in order to make the people ‎dissatisfied with Maduro’s rule and didn’t allow the sale of oil, which was the main source of ‎capital for the country and therefore, the living standards of the people fell sharply and ‎Venezuela was hit with severe inflation.‎

‎7. In contrast, Maduro tried to save the country from the problems with the support of ‎domestic and foreign support. Therefore, in domestic politics, he prevented the deaths of his ‎people due to hunger by distributing food baskets and in foreign policy, he repeatedly made ‎trips to various countries from east to west and from north to south, but only a few nations, ‎such as China, Russia and Turkey agreed to cooperate and support him.‎

Over the past few decades, the United States hasn’t spared any country from its direct and ‎indirect intervention and clearly calls for the world to follow it. Therefore, in every country ‎where there is popular government, Washington immediately plans and schemes to ‎overthrow it and form a puppet government which follows its policies. The plundering of ‎national resources and the absolute adherence to their policies are two of the United States’ ‎main goals in invading other countries and therefore, we see the presence of the United ‎States from the West to the East and from the North to the South.‎

But a notable fact is that the fate of the countries that followed American policies or allowed ‎them to intervene is somewhat similar to each other. Civil war, insecurity, instability, a ‎dependent and unorganized economy, humiliating behaviour by politicians and the people ‎and increasing poverty are among the cornerstones of the results of American intervention in ‎various countries. For example, this can be seen on different continents, including ‎Afghanistan in Asia, Libya and Sudan in Africa and many Latin American countries in the ‎Americas. ‎

The people of the world, especially Venezuela, must be vigilant about the cruel and abusive ‎policies of global imperialism and not allow their national and popular governments to be ‎changed into puppet regimes.‎

Strategic disagreements between the US and Europe have begun