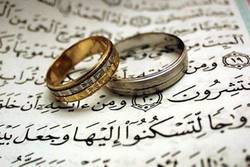 According to Islam, not only hasn’t a specific age for marriage been mentioned, but there is ‎‎no determined age difference between a man and a woman who want to marry each other.‎

Explanation: What is the appropriate age difference from the Islamic point of view?‎

According to Islam, a specific age for marriage hasn’t been mention and also a specific age ‎‎difference between a man and a woman who want to marry each other also hasn’t been ‎‎explained and there is no mention of whether the boy or girl should be younger or older at ‎the time of ‎marriage. Although there is no specific age for marriage in Islam and no specific ‎age ‎difference is mentioned, the narrations narrated from the Holy Prophet Muhammad and the ‎‎Infallible Imams and the practical life of those nobles are evidenced by his ‎efforts to hasten ‎marriage. According to the biography of the Infallibles and historical ‎evidence, the marriage ‎of the Imams took place at the age after puberty and before the age ‎of twenty. The same ‎was true of their grandchildren, who typically married before the age of ‎twenty. In general, ‎narrations are used that state that the basic age for marriage is after puberty, and ‎if a ‎person feels the need to do so in such a way that abandoning it causes sin, marriage ‎‎becomes obligatory at this age.‎

On the other hand, the biography of the Infallibles and historical witnesses show that the ‎‎Imams and the vicegerents of God, except for a few cases such as the marriage of Lady ‎‎Khadijah with the Holy Prophet Muhammad, were older than their wives. Therefore, it may ‎‎be said that in marriage, it is better for the man to be older than the woman but it is not ‎yet ‎possible to determine what the age difference was, as historical evidence suggests. At ‎that ‎time, this issue was not very important and the Imams had different age differences ‎from ‎their wives.‎

On the other hand, since there is usually a difference of two to six years between the ‎‎maturity of girls and boys, it is better to observe this amount of difference in the marriage ‎‎of girls and boys because scientific research and psychological and sociological findings have ‎‎proved and confirmed this point. If the girl’s age is less than the boy’s age, he usually falls ‎‎short of the man’s position and tries to be obedient. As this age difference increases, the ‎‎woman’s sense of motherhood, sisterhood, or guardianship increases, for example, a ‎‎woman who is 15 years or older than her husband always treats her husband like a mother ‎‎or older sister. On the other hand, if the man is older, the woman can rely on him. At the ‎‎same time, family management is not a problem, and women’s attractiveness to men is ‎‎maintained and mutual understanding is enhanced.‎

Since the practice and tradition of the Infallibles is a model and proof for us, and the ‎‎scientific findings that common sense has accepted have been confirmed by religion. In ‎‎determining the age of marriage and whether the girl or boy is younger or older at the time ‎‎of marriage, we can consider the life of those nobles and scientific findings as a religious ‎‎criterion and norm and say that it is better in the marriage of girls and boys that the girl is a ‎‎few years younger than the boy.‎