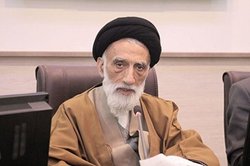 Ayatollah Mousavi-Esfahani emphasized upon the importance of practical compliance by the officials, especially the future representatives of the next Islamic Consultative Assembly, with the orders and instructions of the Supreme Leader and said, “The electees must solve the economic problems by implementing the Resistance Economy.”

RNA – In an exclusive interview with Rasa News Agency, Ayatollah Sayyed Mostafa Mousavi-Esfahani, the representative of the people of Hamadan in the Assembly of Experts, referred to the priorities of the next Islamic Consultative Assembly stated, “Our representatives must consider the orders and instructions of the Supreme Leader of the Islamic Revolution [Ayatollah Khamenei] among of their most important duties if they want to serve in an acceptable manner. In this regard, many problems will be resolved, with the grace of God.”

His Eminence said that the Resistance Economy was devised by the Supreme Leader several years ago and added that it has been explained to numerous experts so that it executed but they are simply talking about launching projects to keep the project open.

Ayatollah Mousavi-Esfahani stating that the elected members of the next Islamic Consultative Assembly must act in the light of the Supreme Leader’s remarks and stated, “The Supreme Leader emphasized that we want to solve the countries problems, especially in the field of the Resistance Economy and the economy based on the country’s internal capabilities and closing our eyes on negotiations with the United States, Europe and abroad.”

His Eminence added, “According to the Supreme Leader, in order to solve the economic problems, we must place the criterion on the issue of the Resistance Economy, and the representatives must put the priorities of their work in implementing the Supreme Leader’s commands, especially in regard to economic issues, youth unemployment and marriage.”

He said, “The most important priorities of the officials, especially the representatives of the Islamic Consultative Assembly, must be to implement the orders of the Supreme Leader.”

Ayatollah Mousavi-Esfahani noted, “Just as the Supreme Leader has been declaring a slogan of the year for many years on subjects such as economic issues, domestic production, independence in production and oil independence and the representatives of the people must address these issues.”