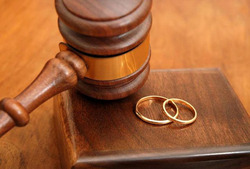 According to the author of the book, a deeper cause of divorce is the crisis of values.

RNA - The third chapter of the book deals with the causes of and factors contributing to divorce. According to the author of the book, a deeper cause of divorce is the crisis of values. As mentioned by many people, some primary factors contributing to divorce in Iran are the disagreement between couples, bad behaviour, hatred and abomination, familial differences, men’s sterility, women’s infertility, abstention from paying alimony, age differences, imprisonment of a spouse, mal-conduct of the spouses, deviation of the wife, disobedience, unemployment and physical harassment.

The mentioned issues can’t be the prime causes of divorce. Divorce is both an individual and social phenomenon, and as several factors contribute to the occurrence of social phenomena, divorce is a social one. On the other hand, each factor alone can’t cause divorce, yet, divorce happens if they work together in a network or as chains. The research on divorce requires the examination of different factors such as mental, economic, political, social and etc.

The analysis of the effect/consequences can be useful in suggesting some solutions for prevention from divorce, therefore, in addition to knowing the causes of and multifaceted factors contributing to divorce and their level of intensity should be examined. Divorce, as a phenomenon, caused by social factors and conditions, mutually impacts society. Therefore, the effects that society and divorce mutually have on each other are important and should be studied.

Divorce and social classification have significant effects on each other; for example, individuals’ employment, social class of each person and economic and income status certainly impact the familial life.

The fourth chapter of the book discusses different types of social control. As laws in each society reflect its values, laws’ role, development and impacts on divorce can be a deciding factor. Another part of the fourth chapter deals with divorce in different religions.

The fifth chapter talks about a collection of causes and factors contributing to the occurrence of divorce. The factors probably contributing to divorce fall into some categories, and each category has some subcategories. Family encompasses some members who can impact each other and the whole structure of the family. Our view/behaviour towards marriage, the possible polygamy, divorce, ideals, mothers’ opinion about divorce (approval of or opposition to it), behaviour and beliefs of the fathers, sisters and brothers affect a family’s view on divorce.

In the selection of the spouses, three fundamental factors with different levels of efficacy, such as supplementing the marriage with proper age, ration and emotion, ought to be considered. Social and individual conditions, together with societal sub-environment are some other factors contributing to divorce.

The fifth chapter enumerates the characteristics of divorce, its causes and the approaches of different societies to divorce. When divorce has not an undesirable image within the network of social values in a society, or if it isn't unusual/ugly there, its number will rise, permeates and turns to a contagious social malady.

In such societies, as Émile Durkheim puts, the collective conscience, the origin of values, adopts two radical positions, either totally spurning divorce, especially as Catholics do, or approving of divorce, when it inundates all the society with instability and unrest. In accordance with the author of the book, the only way in this regard is Islamic moderation. Our society regards divorce an ugly event. This view reduces the number of divorces, however, it doesn't prevent the society from doing it as the ultimate solution.