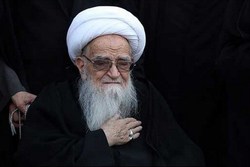 Imam Javad (AS) inherited excellent behaviour, good attributes and knowledge from his ancestors, he had a high position, and scientific and religious figures esteemed him.

RNA - Ayatollah Safi Golpaygani wrote a note on the sad occasion of Imam Javad (AS) martyrdom: Imam Javad (AS) inherited excellent behaviour, good attributes, knowledge and piety from his ancestors, he had a high position, and scientific and religious figures esteemed him.

Grand scholars and experts on the science of discourse were Imam Javad’s students as he could resolve the most complex scientific issues.

There are several narratives on this Imam’s virtues, moreover, there are a lot of scriptures giving credence to him as Imam. Although he didn’t live a long life (26 years old), he provided different sciences, and during his life, many debates were held between him and the grand scholars of that time, for instance, the scientific debate between him and the then chief of justice, Yahya bin Aktham, in the presence of Mamun, the Abbasid Caliph and a group of people associate with Abbasid family and others. In a debate, he elaborated on an issue so skilfully that the chief of justice was astonished and embarrassed; then Imam (AS), following Mamun’s suggestion, asked Yahya a question, however, he couldn’t answer the question and asked Imam to provide him with the right answer. Imam told him the response, and at this point, all the Abbasids found that, as Mamun had said, Imam, despite being so young, was more virtuous and knowledgeable than all scholars of that era; and they knew that God, the Sublime, had granted this Imam the said attribute, virtue and high scientific position.

Another debate of that Imam was the one when he was only 8 years ole, the debate in which he dealt with the complex issues scientifically, as mentioned by ibn Shahr Ashoob in the book al-Jala va ash-Shifa.

Appointment as Imam in childhood

His appointment as Imam prior to the age of puberty was unprecedented to that time, and no other Imam was appointed as Imam in childhood. However, some prophets were Heavenly appointed as apostles in childhood; for instance, Jesus and Yahya, and in this regard, and about Jesus, the Quran mentions,

“He said, ‘Indeed I am a servant of Allah! He has given me the Book and made me a prophet.”

And about Yahya, It says,

“And We gave him judgement while still a child.”

Both ordinary people and elites have long approved of the fact that the knowledge and sciences owned by Imams, together with their understanding, weren’t acquired through education, the pass of time or physical growth.

There are some narratives and stories on the genius, gifts and the virtues of Imams in their childhood. Even Muawiyah, Yazid and Abdullah bin Umar talked of Imams’ non-acquisitive knowledge; for example, Abu Hanifa, when Imam Moosa Kazim (AS) was 7 years old, asked him some jurisprudential questions and he answered them properly.

The analysis of Imams’ life and the sciences they owned in their childhood and youth shows that the source of such knowledge is no education.

The boundless command of Imam Ali (AS) of different fields of Islamic sciences, law, theology and ... is impossible to be acquired through education, and what school, other than the school of the Prophet of Islam could have such a graduate? What teacher could train a student like Ali (AS) who is capable of carrying the Heavenly sciences to become the door opening onto the treasury of sciences?

If the sciences/knowledge owned by the followers and students of the prophet’s school are compared to that of Imam Ali (AS), they will be a drop against a sea.

These sciences were granted to them by Heaven, they were the legacy of the Prophet of Islam (S), and having command of such sciences can cause fanaticism both in the children and the old. Whether does the old have the capacity of having this broad body of knowledge? And can the old scholars answer the questions of the people without preparation and in an impromptu manner?

Here, there is no difference between a 7-year-old child and a 70-year-old man; both should be fully competent and qualified so that they can acquire, understand and interpret such sciences.

As Mansoor (the Abbasid Caliph) testified that Imam Sadiq (AS) was one of the persons about whose high position God said,

“Then, We made heirs to the Book, those whom We chose from Our servants.”

Each Imam was the selected servant of Heaven upon whom God bestowed the Book and the science of the Book, and the Ummah will enjoy such a figure, a member of Ahl al-Bayt (AS), in any time.

Different narratives, including Thaqalain, Safina, Aman and etc. and the pass of time have given credence to what mentioned and the fact that the mentioned narratives are all about Imams, the ones who whose knowledge and wisdom are the God-given gifts. And, Muslims, either in the East or the West, ought to acquire the proper sciences from this Heavenly source.