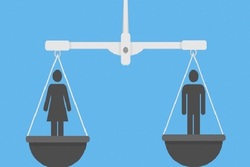 In order to know Islam’s philosophy of the difference of rights between the man and woman, the following items are necessary to be noted:

RNA - In order to know Islam’s philosophy of the difference of rights between the man and woman, the following data-x-items are necessary to be noted:

A) According to the holy religion of Islam, God lays down the rules and regulations. The sublime one who is fully aware of the structure, conditions and requirements of all creatures, in none but their creator, therefore, he is the only qualified one to formulate and then impose rules based on man’s characteristics and with regard to the complex relationships between man’s activities and his/her desire for attaining felicity in the Hereafter.

Therefore, the only path of obtaining the true felicity is resorting to the sacred religion, a Heavenly faith has provided the humanity with felicity through the introduction of the beliefs, moral behaviours, orders, rules and etc. Therefore, there is an absolute fact beyond the existence of the man, and it is the only way of attaining the absolute felicity and truth.

B) According to many Muslim thinkers, reaching the said truth is viable. The requirement of reaching a proper understanding of the Heavenly revealed texts is the possession of the required items, means and tools. This proper understanding isn’t dependent upon the male or female world-view, or that of belonging to a specific time.

In order to know feminism and its evolution, its intellectual eras, known as the first, second and third waves of feminism should be known. All the mentioned approaches implicitly believe that women are wronged unjustly due to their gender. In this regard, they distinguish sex from gender.

Here, sex deals with the biological differences between man and woman, yet, gender refers to the personal and psychological characteristics determined by the society, associated with man and woman or male and female qualities. There is an evident link between the sex and gender, however, the true nature of this link has raised multiple arguments among the feminists. There is a difference of opinion among the feminists on how man and woman are different in terms of sex and gender.

Some feminists believe that man and woman are different biologically, however, the second group disagree with them and argue that biological theories have been formulated for the justification of the subordination of women.

The part of gender in legal issues

Overall, the feminist theories on the role of gender in legal issues, fall into two categories:

According to this model, the liberal law is the best law for defending the rights and values ruling over women, however, despite the existing liberal principles, women are not treated the same as men, and they are not enjoying the rights equal to the ones appropriated for men, as the said principles can’t defend the impartiality, logicality, justness, freedom and equality values in the treatment of women.

In other words, women are regarded as equal to men by neither the liberal regulations nor by the contemporary liberal law; therefore, these laws and regulations should be reviewed and revised so that gender is recognised as the origin of social inequality, and women are truly and not formally granted equal rights; and when a special society or situation requires, some specific rights should be given to them.

The model of change, similar to the equality one, attempts to coordinate the liberal values, related to the law with the actual legal treatment of women. Developers of this plan regard the equality theory doomed to failure, as according to them, the said view believes the difference and bias should be resolved through the correction or modification of the legal behaviour. As this model, retaining the principle of the liberal law, deals with the apparent correction, though the general structure of this law is deficient.

The general concepts and categories of the liberal law are formed in accordance with a male-based set of criteria, and women can’t gain their real rights unless the said concepts and categories are morphed. Therefore, a fundamental change should be made into the feminist legal system. They have devised and extracted some different plans out of this theory, two important of which are: Structural change and thematic change