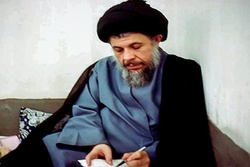 Shahid (Martyr) Ayatollah Sadr provided a non-usury model of banking, the model requires the bank to draw up the deposit contracts based on a contract giving the bank the power to act as the attorney of the people instead of being based on borrowing/lending with interests; moreover the said contract regards the borrower who pays the interest as a depositor.

RNA - The issue of Islamic banking and non-usury banking was much discussed about 50-60 years ago, and Ayatollah Sadr, as the first to publish a book on this topic, delved into the Western banking and its transactions, he showed that what transactions of the Western banking is along with usury and provides some reason on his claim, and next, he introduced some substitutes for those banking models involved in the usury, and mentioned that we can have non-usury bank through making changes to those transactions with usury.

He provided a non-usury model of banking, the model requires the bank to draw up the deposit contracts based on a contract giving the bank the power to act as the attorney of the people instead of being based on borrowing/lending with interests; moreover the said contract regards the borrower who pays the interest as a depositor.

Fortunately, the new model was welcomed by a group of believers in Kuwait, and they founded a bank named Kuwait’s House of Investment based on this model 40 years ago; the said bank is now a highly developed and successful bank having some branches in 18 Muslim countries.

At the same time, Nijatollah Sediqi, a prominent Sunni religious scholar and a professor of economics, composed a book on non-usury banking in Islam.

The idea of Shahid Sadr was welcomed as he was both a Mujtahid and a source of emulation; Nijatollah Sediq, the religious scholar and the professor of pecuniary and banking affairs, didn’t much deal with the execution area in his book. Some banks were also founded in UAE, Qatar, Saudi Arabia and Jordan based on Sediq’s book. Contrary to the first line attempting to justify the Western model of banking, through the second idea disapproving of the Western model, the line of thought of Shahd Sadr and Nijatollah Sediqi was introduced and welcomed.

Some banks were established based on this model and developed, and currently there are 50 Muslim countries having established banks on the idea of non-Usury banking; besides, banks in some other non-Muslim counties such as the US, UK, Germany, China and Russia are non-usury and this line of thought continued to advance up to 10-15 years ago.

A question raises here asking that “whether is Islam bound to the said instruction?” The answer is no! As there are several additional inspirational and viable instructions that are supposed to be employed by the banking industry of the state so that our banking could be named the Islamic model of banking.

Saying what has been mentioned up to now solely pertain to the non-usury banking having attempted to omit usury from the banks, the said group of people distinguished the non-usury banking from the Islamic banking; we should endeavour to establish other Islamic instruction in the Islamic banking industry along with the omission of the usury, and eventually, the idea of founding an absolutely Islamic model of banking was proposed 20 years ago.

The Idea of the Islamic banking is still to be operated

The three mentioned views are being examined, the Central Bank is conducting some research on how to move from the non-usury banking towards the Islamic banking and it is attempting to determine what the components of this model are so that we can claim that we are stepping into the area of the Islamic banking.

No bank, credit institute or fund is authorised to violate the limits of the said framework; therefore, there is no foreign or domestic usury bank working here. However, the banking systems of the countries other than the two said countries, include both non-usury and usury banks.

However, as both usury and non-usury banks are active in other countries, working in those countries is much easy and their  people have the right to choose between the two systems; accordingly, due to the work of banking is performed easier than in our country, and customers aren’t hoodwinked by fictitious transaction, as both types of usury and non-usury banks exist in those countries; the non-usury banking was chosen for Iran; as the non-homogenous population of Iran is composed of all different classes and groups, and as and some customers are not concerned with the lawfulness or unlawfulness of the loans., it is not easy to perform the work of banking here in our country.