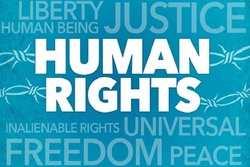 Following the sessions on “the discourse of knowledge”, held specifically on the occasion of the grand month of Ramadan by the Islamic Research Centre of Mashhad seminary, affiliated to Sheikh Mustafa Ashrafi Shahroudi, the scientific session of “Jurisprudence and Human Rights” was presented. In this session, Hujjat al-Islam Dr. Sayyed Ali Taleqani, the teacher of the Islamic philosophy and discourse in Mashhad seminary, dealt with and examined the principles, schools and relations of jurisprudence and human rights and presented his view in 5 sections.

The researcher of Islamic sciences added, “The other point on the link between philosophy and human rights is that the human rights specifically deal with the owner of the right. For instance, whether has God provided the man with rights such as equality and freedom or not? It is said that justice means human rights, but equality doesn’t mean so. Anyway, both of the concepts include the right of the man. Therefore, human rights has got some Islamic, liberal and Western definitions. Even Cyrus Charter of Human Rights has been regarded as in line with present human rights, though there may be some basic discrepancies between them. Thereby, it can be mentioned that, “according to Islam, human rights is a subcategory of jurisprudence”, i.e. how human rights is presented within the science of jurisprudence.

Four conditions unanimously accepted as the characteristics of human rights

Then, the teacher of Mashhad Seminary introduced some conditions emphasized on within the category of human rights:

1. Human rights include a right. Regarding the right of the human, there are two principles:

a) The first principle applies to the right of the person. According to John Locke, a man is a vigilant creature, capable of recognising his self as the self; therefore, the man without this ability, for instance a child, or a mentally retarded person, will not enjoy the said right.

b)The second principle deals with the right of the human. According to this principle, every man, created through the Organic Darwinian Biological manner enjoys this right; though s/he may be incapable of recognising his own self.

Yet, by the phrase “human rights” the second principle and meaning is meant.

2. The second condition of the human rights is totally against the plurality of the rights, .or rights as a group together.

3. The other condition is the quality of being global, public and human, and it is not restricted to a group, gender, people or region.

4. The other condition of human right is being superior to and ruling other rights. Although these rights may include some conditions and exceptions, yet if compared to the non-human rights, they will find superiority, priority and government.

The disputed conditions of human rights

The teacher of philosophy and Islamic discourse pointed to some other conditions of human rights, which are disputed among the world advocates of human rights. He enumerated them as the following:

1. The first disputed condition is the irrevocably of human rights. Human rights can't be revoked automatically or by an organisation. In other words, they are the natural rights of the man.

The opponents of this condition point to some issues including, some human rights may overlap with each other, or some may have priority over others, therefore all of them can’t be the natural rights. For example, the right to put an end to the life or committing suicide is being discussed in the present era and they are possible to be regarded as rights once. Even the right of execution is in some cases regarded as legal; therefore, according to the human rights, the right of living can’t be natural.

2. Some also have added another condition to the human rights, that these rights are maximum and not minimum; therefore, different and multiple views and beliefs can’t be mentioned in the declaration. The declaration is comprised of 30 clauses, 6 of which are the chief. The minimal characteristic of the human rights is also disputed.

4. The moralists/humanists fall into two groups: The first are advocates/followers of the task-oriented ethics, proposed by Kant. In Kant’s philosophy of ethics, the natural bases include a series of natural and moral tasks, understood by the wisdom on which the moral musts/dos are based. According to an intellectual interpretation, and not due to the Kantian interpretation, the man is indeed original.

5. The second group of the moralism, is the naturalist moralism. According to them, as there are some natural laws/rules in the nature, there are also some natural rights. As if these laws and rights are some developmental issues.

6. It should be attended that the there isn’t much difference between the bases and foundations of the contractualism and jurisprudence, as either we might have entered a contract or not. Therefore, irrevocability is not concerned on this basis, unless this type of contract is regarded as a boundless natural contract, thought it is highly unlikely. However there are many important differences between the foundation of the moralists and jurisprudence.

In addition to the ethical foundations or contract, a third category, called experimental science can’t be considered. For example, the orientation and tendencies are dealt with by the new science. But, whether are all the orientations genetic? For instance, whether can the tendency towards homosexuality or murdering others be a right? Or is it malady that should be remedied?