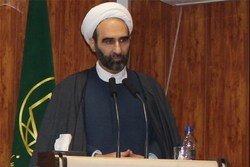 Hujjat al-Islam Muballeghi said, “The philosophy of existence of law is that it is supposed to generate the needed, desired and rational items and to obliterate bitter issues and social harms”.

RNA - Hujjat al-Islam Muballegi, in the inauguration ceremony of the books "Fiqh, Law, Social Facts", and “Rules on the Membership of the Parliament”, two books published by Parliaments Research Centre, pointed out, “the Parliament, all the related subsidiaries and organisations should be focused on  intellectual, operational and technical support of legislation and helping the legislator”.

The member of the Assembly of Experts, pointing to the inauguration of the book “Fiqh, Law and Social Facts” by Parliament’s Research Centre, said, “this book is a collection of the papers presented in the International Conference on Fiqh and Law, stressing that, the law shouldn’t ignore the social facts, but the chief philosophy of the law is to do the most critical observations and direct much attention to the facts and be able to productively interact with them”.

Hujjat al-Islam Muballeghi stated, “The law is not to solely create a form and prestige for itself; nonetheless, it is supposed to impact the society and thereby, it should be renovated based on the developments of the society”.

The chairman of Parliament’s Research Centre stressed, “Legislation is successful when it doesn’t neglect the social facts and observes the continuous changes and developments of the facts, and accordingly, when it upgrades itself”.

Mentioning that facts are fragile, Hujjat al-Islam Muballegi said, “If the law can’t deal with the social facts, it will lose its centrality, the law maintains a sensitive position, it is the centre of establishing order and the centre from which the holy Islamic system deals with facts, therefore the significance of the law doesn’t lie in its plurality, but in its quality and intelligence”.

The member of the Assembly of Experts, pointing to the close links between the law and technology, said, “Technology changes the manner of social interactions, and thus, it challenges the legal order present in the area of social interactions. It is possible to bring the specific culture of the related area; accordingly the law should properly develop and act intelligently, commensurate with the cultural developments and their requirements, otherwise, legal chaos may be created within the interaction field of the society”.

Hujjat al-Islam Muballeghi said: If the legislation isn’t carried out in a manner coterminous with technological advances, technology will shatter the authority of the law”.

Pointing to the third international conference on Fiqh (jurisprudence), Law and Social Facts, Hujjat al-Islam Muballegi said, “Parliament’s Centre for Research held its first conference on the social facts two years ago, and inviting some sociologists, jurists and those acquainted with social crime and criminal policy to present their definition of the facts, it attempted to announce to the Faqihs (jurisprudents), legislators and jurists that the said definitions are the facts of the society and that Fiqh and law should be focused on these items” .

Regarding the book “the Jurisprudential Rules on the Membership of the Parliaments”, he said, “Today, concerning the task of the members of the parliaments, a move is being taken, though it lacks the sufficient celerity”.

Hujjat al-Islam Muballeghi reiterated, “Some components of the said move include, the moral behaviour of the parliament members, the law on electoral procedures, the rights of the people over the representative and the pledges given by the representatives in election campaigns, many not fulfilled after being elected; and Jurisprudence should attend this action and the seminary is expected to define and introduce the jurisprudential tasks of the representatives”.

It should be mentioned that two books of “Fiqh, Law and Social Facts” and “the Rules and Jurisprudential Principles of Membership of the Parliament” were inaugurated in the presence of the chairman of Parliament’s Research Centre and member of Assembly of Experts, Hujjat al-Islam Ahamad Muballeghi, and the chairman of the library, museum and Centre for Documents of the Parliament, Hujjat al-Islam Ali Imad.

In another part of his speech, Hujjat al-Islam Muballegi pointed to the significance of the parliament’s library and its Centre of Documents, and then said, “Many countries much value their mediocre legacy, and though we have a great and highly invaluable legacy, it hasn’t be maintained properly”.

He added, “Parliament’s library has collected some valuable books, they connect the library to the history and Majlis’s properties, and it has attracted many scholars from the world”.