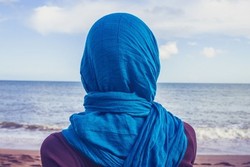 If we observe the conditions of the past few years, it suggests that people have conducted a bigger share of work on the issue of Hijab. However, it is not surprising do their pioneering efferts in the rise for the establishment of the Islamic Revolution and in the holy defence.

RNA - Mrs. Naima Islmloo, a researcher in the field of modesty and Hijab, and the chairwoman of Khaybar nongovernmental Institute, through a talk on the issue of Hijab and its impairment in the country, said, “The topic of modesty and Hijab isn’t as shallow as it is generally considered. It refers to the natural importance of the man’s coverage and his/her lust, two factors that impact how the individual and social identity of the man is built and the public behaviour is managed.”

Here is Part 2 of this interview:

Islamloo stated, “We follow the Heavenly orders of Islam on the issue of Hijab, however the Western secular world, manoeuvring on the democracy, freedom and human rights, makes the claim that each person ought to enjoy the right to choose/do whatever s/he wishes. At this point they should be asked, Why are you (acting) against HIjab? Across the world, many women wearing Hijab are being killed, fired or prevented from entering different centres. Why is the West terrified by this issue? In fact, this dimension mirrors the motivation, plans and plots of the enemy, which can be subject to an in-depth examination.”

The researcher of the field of modesty and Hijab said, “Another side of the said rectangle encompasses the internal weakness and passivity concerning the issue of Hijab, The governmental officials and system are expected/supposed to execute the Heavenly orders. Clerics, as a religious institution, as well as researchers and Muslim people having the responsibility to enjoin good and forbid the wrong are other sides of this rectangular.

The inactivity of clerics in elucidation of the issue of Hijab

She added, “In my opinion, the act of enjoining good and forbidding the wrong has been dealt with maladroitly and with insufficient knowledge rather than being neglected, the people demand their own rights of having a morally secure society through improper routs, as a result, they may take an extreme course, as happened in the early years of the Islamic revolution, or they may neglect parts of their responsibilities in this regard, as it has occurred in the recent years. The weakness of the government in terms of legislation, implementation and supervision is required to be probed. As the Institution of religion; indeed, clerics have not acted actively enough in the seminaries, they were supposed to produce some up-to-date contents in the field of thought/ideology so that the beliefs and thoughts of the people would be formed properly; in fact, the clerics haven’t dynamically acted in the executive and behavioural domains as they should have. Contrarily, and despite their empty hands, people, as the other dimension of the triangle (including three sides of people, clerics and government), have performed their part/s properly and effectively.”

Islamloo stressed, “If we observe the conditions of the past few years, it suggests that people have conducted a bigger share of work on the issue of Hijab. However, it is not surprising do their pioneering efferts in the rise for the establishment of the Islamic Revolution and in the holy defence.”

We are not totally responsible for the Hijablessness malady

The researcher of the field of modesty and Hijab described the third side of the aforesaid rectangle related to the present facts and conditions and said, “It is possible that we attempt to assume the responsibility of many events due to our lack of acquaintance with the discourse criticism. Indeed, our weakness contributes to the Hijablessness and a Mal-hijab in some parts, besides, the plans of the enemies add up to this problem, yet another cause is the natural desires, lust and tendency to commit sins, and such a tendency remains in the man even if we culturally prepare the grounds and frustrate the plans of the enemies.”

Then, Islamloo stated, “With regards to a world in which capitalism and the Western lifestyle pulling the man towards hedonism, a world in which pleasures and body are regarded as original,   the deficit of a Mal-hijab and Hijablessness existing in our society is not solely the outcome of our fault/s. Indeed, sexual desires and lust have long been underestimated and affected the destiny of the man in the history and the proper programs have not been made in this regard.”

Islmloo mentioned the absence of proper planning on the marriage of the youth and treatment planning on the control of the sexual desire and self-control as some instances of the mentioned negligence and shortcoming, and then noted, “Different from us, the US congress has appropriated funds for the education of self-control in the American schools since 2000. Thereby, it should be asked, though the Western world has gone to the end of the path, why does it allcoate funds to such issues? The answer to this question is that, they have reached the endpoint of the sexual freedom path and recognised that the sexual freedom bears no fruit but depression, anxiety, disease and the collapse of their family.”