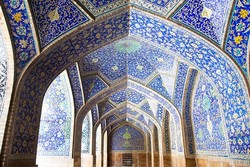 Rasa – Hujjat al-Islam Mostafa Jamali concluded his series on the pillars and the nature of the geometry of modern Islamic civilization by explaining the lifestyle of mankind.

RNA – According to Vasael.ir, Hujjat al-Islam Mostafa Jamali, a faculty member of the Islamic Sciences Academy of Qom, concluded his series on the pillars and the nature of the geometry of modern Islamic civilization.

In the context of the lifestyle of mankind, we must focus on three pivotal aspects:

Firstly, lifestyle of mankind has three arenas: personal, family and social, each with special rites and rituals. These three arenas of lifestyle have a direct relationship and effect on each other. Therefore, in designing a model of lifestyle, one must to pay attention to the characteristics of each arena and the impression and impact of each arena on the others.

Thirdly, the Islamic lifestyle is greatly influenced by the infrastructure of Islamic civilization such as social developmental structures and programs. Thus, one cannot expect the creation of a culture of contentment in the world through the model of consumption or through a culture of society which is based on the model of capitalist economics as this is based on the ever-increasing use of humans in order to maximize its consumption.

In conclusion, cultural products, including political, cultural and economic products, must be created.