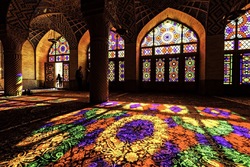 In other words, belief in and the practice of religious rites and social activities are based on the phenomenon of guardianship and love around the Imam is the cause of the formation of civilization.

2. The two pillars of civilization, namely, lifestyle and the infrastructure of lifestyle, can be cited as examples in which the phenomenon of the guardianship and social management is ongoing. The lifestyle of “individual, family and society” is based on Islamic models which come from religious sources that are completely different from the lifestyle which is based on Western ideologies. Changing the current lifestyle requires the provision of a variety of patterns in different areas of life such as the model of dress, nutrition, city-building etc.

3. The most important step in the realization of Islamic civilization is to change the social aesthetic and social-civilizational-intellectual system to revolve around the belief in God and absolute love towards the Prophet Muhammad and the true awlīyā’ (friends) because the core of the Islamic ummah and the pillar of the tent of Islamic civilization is the absolute love towards the phenomenon of divine guardianship and this love is formed through love to the awlīyā’ of God and the unity of the ummah will not be possible except in this way.

It is necessary to note that changing social tendencies require their own methods and in this regard, the production of Islamic art is necessary and it is necessary to use all the capacities of the Shi’ah world, just as the Tragedy of ‘Āshūrā was beneficial in changing the emotions and social aesthetics of the ummah.

4. In the context of social change, the possibility of producing thoughts and a network of Islamic science and knowledge will be provided. These thoughts have several layers that, from a glance, can be subdivided into fundamental, strategic and practical thoughts and these same thoughts form the culture of society.

In other words, the concepts, social structures, patterns and models in various political, cultural, economic arenas all form a secondary and fundamental pillar of civilization upon which social relations, actions and interactions occur at the micro and macro levels.