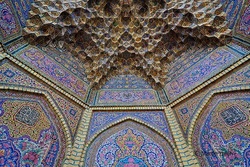 RNA - According to Vasael.ir, Hujjat al-Islam Mostafa Jamali, a faculty member of the Islamic Sciences Academy of Qom, said three necessary levels of education and science concerning the engineering of Islamic civilization must be deduced and created in a coordinated manner in order to bring about the realization of this dimension of Islamic civilization.

These three levels are:

(B) The Network of Islamic Sciences: The second layer of the civilization-building thought of Islam is the production of Islamic sciences which have been formed, on one hand, based on the jurisprudence of civilization and, on the other hand, have higher efficiency in bringing about a change in society towards the realization of an Islamic civilization. Therefore, the two constraints of Islamism and efficiency in the development of servitude are considered to be a measure of the validity and legitimacy of Islamic sciences. It is clear that the production of such a network of efficient sciences is possible only in the light of the management of the network of education and research so that in the light of this, it is possible to benefit from the completion of the capacities of the Islamic world in the realization of an Islamic civilization.

(C) Iranian-Islamic Model of Progress: The third layer of the civilization-building thought of Islam is the achievement of the Islamic-Iranian model for progress and modeling in line with the original model. Models which have been formed on the basis of the jurisprudence of civilization and Islamic sciences on one hand, and, on the other hand, by calculating the objective situation of each region or country, they can express their particular version of the coordinated change in that region. The work that is currently being done for Islamic countries is based on liberal-capitalist development models and the development of their countries is managed in regard to the development of their goals on a global scale.

Hujjat al-Islam Mostafa Jamali, a faculty member of the Islamic Sciences Academy of Qom, explained that the symbol of a civilization is related to the products of civilization in a continuation of article on the pillars and the nature of the geometry of modern Islamic civilization.

Of course, in the case of the products of civilization, it must be noted that the products of civilization include political, cultural and economic products and it is not that such that products can only be understood through technology, although in the present age, technology itself has a special culture. In other words, science and technology, as well as all structures derived from modern civilization are due to their foundations, which inspired their creation and invention, and also due to the direction of the form and function of their work, carry their own tendencies which are more compatible with some foundations, intellectual goals and beliefs than others.

Therefore, in the engineering of Islamic civilization, one must pay attention to this important aspect that the attainment of nature and the making of tools and technology never occur in a neutral manner. Not only does the form of the attainment of the natural world which takes shari’ah/religious laws into consideration not lead to the destruction of nature and human life but it ends in the comfort and tranquility in regard to the creation of clean and harmless technology.

Although the technology of today’s world has brought comfort and prosperity to mankind in appearance, but with little study of the field and the acknowledgement of many Western scholars and scientists, technology in the modern world has led to destruction of nature in general and has also caused a lot of harm to the human body. A major problem in the world today is air, sea and environmental pollution and thus, we have seen the discussion of green or clean technology.

Lifestyle is everything that forms the context and essence of human life. In fact, in some way it must be regarded as the product of the same culture that people live in regards to, such as family, customs, marriage, dress, entertainment, patterns of consumption, business and personal and social behaviours and everything that is a result of the outlook of the people towards their lives and their definitions comes from their goals.